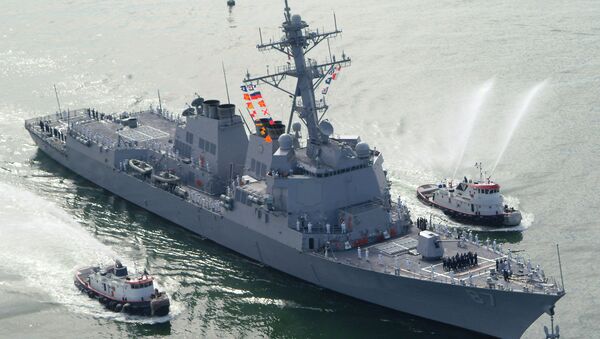 © REUTERS / Karl Ronstrom/File photo
Subscribe
On Sunday, the US guided missile destroyer USS Mason was reported to have been attacked by two missiles fired from the Yemeni cost. A Pentagon spokesman speaking to Reuters suggested that the attack came from territory controlled by Houthi militants.

Speaking to Reuters, DoD spokesman Captain Jeff Davis explained that the Arleigh Burke-class destroyer, sailing off the western Yemeni coast in the Red Sea, "detected two inbound missiles over a 60-minute period" beginning at around 7 pm local time. "Both missiles impacted the water before reaching the ship." There were "no injuries to our sailors and no damage to the ship."

The attack was said to have taken place just north of the Bab al-Mandab Strait, which connects the Red Sea to the Gulf of Aden.

The USS Mason was officially deployed to the area together with two other US Navy vessels in response to an attack earlier this month on a UAE military vessel participating in the Saudi-led coalition's brutal bombing campaign against the Houthi rebels. The UAE ship HSV-2 Swift was sunk, allegedly by Houthi rockets. The UAE called that event an "act of terrorism."

Former US Diplomat Blasts White House for Allowing Saudi War Crimes in Yemen
Saudi Arabia and its Arab coalition allies, along with the US and its European partners, have supported the government of ousted President Abdrabbuh Mansour Hadi, who was toppled by the Shiite Houthi movement in February 2015 when the rebels took control of the capital, Sanaa, and several other major cities. Hadi fled to Riyadh, and Saudi Arabia, with the military support of nine Arab states and US backing, began an indiscriminate campaign of airstrikes against the Houthis to try to restore him to power beginning in March 2015.

On Monday, an anonymous Houthi official speaking to Reuters denied targeting any ship off Yemeni waters. Meanwhile, Saudi Arabia, the US, and the Riyadh-backed Hadi government have regularly accused Iran of supplying weapons to the Houthis, a charge that Tehran has vehemently denied.

To the naked eye, the alleged attack on the USS Mason bears an eerie superficial resemblance to the Gulf of Tonkin incident, the August 1964 'attack' on the USS Maddox (since proven to have been a false flag operation) which gave US President Lyndon Johnson Congressional authorization to begin military operations against Vietnam.

The reported attack on the USS Mason came the same day that US Secretary of State John Kerry officially expressed Washington's "deep concern" over a Saudi airstrike on a funeral procession in Houthi-controlled Sanaa that claimed the lives of at least 213 people and left hundreds more injured. Saudi Arabia denied involvement in the incident and expressed readiness to cooperate with the US in investigating the attack.

Armed Demonstrators Yell 'America is the Great Satan' Outside Yemen's UN Office
Also on Sunday, Secretary Kerry, Saudi Deputy Crown Prince Mohammed bin Salman and Saudi Foreign Minister Abedl Al-Jubeir agreed on the need for a 72-hour ceasefire, but added that the Houthis must first agree to withdraw from the Saudi-Yemeni border.

Russia has called for a thorough investigation into Saturday's attack.  "Such an attack with so many civilian victims cannot but cause indignation and condemnation. It must be thoroughly and unbiasedly investigated and its organizers and executors must be duly punished," a Foreign Ministry statement stressed.

But the weekend attack doesn't seem to have weakened Saudi rigor. On Sunday, a military source told Sputnik that the Saudi-led coalition had launched another five airstrikes on Sanaa. Meanwhile, former Yemeni President Ali Abdullah Saleh urged Houthi fighters to mobilize on the Yemeni-Saudi border and "take revenge" against Riyadh for Saturday's deadly attack.

In August, the UN said that over 10,000 people had been killed, and over 6,500 injured, since the March 2015 Saudi-led intervention. Earlier this month, disturbing reports emerged that Riyadh was using starvation as a tactic in its war against Yemen, with the UN Committee on the Rights of the Child blasting the Saudis for violations of human rights in the war-torn country.