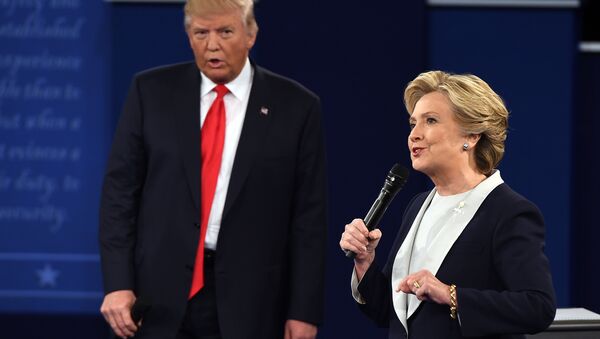 Commenting on the performance of the US presidential nominees in the second round of presidential debates on Sunday evening and their comments about the Syrian conflict, American political writer Diana Johnstone told Radio Sputnik why Hillary Clinton's position seems to be more preferable for the Americans than Donald Trump's.

Both presidential nominees spared no mercy in their attacks on each other. According to a poll conducted by the CNN broadcaster and Opinion Research Corporation following the debate, Clinton gathered support of 57 percent of those that watched the debate, while the Republican nominee was backed by 34 percent.

At the same time, the survey showed that 39 percent of the viewers believe that Clinton's performance was better than they had expected, while 63 percent responded that Trump exceeded their expectations.

Radio Sputnik discussed the US presidential debates with Diana Johnstone, American political writer, Author of the book: "Fools' Crusade: Yugoslavia, Nato, and Western Delusions" and "Queen of Chaos: The Misadventures of Hillary Clinton".

"The US's establishment, which includes the media, has been very successful in presenting a fictional propaganda version of the whole situation about these "nice democratic rebels" in Syria," the political writer told Sputnik.

"When Hillary Clinton argues, she very professionally stays within the scope of official, very well spread-about version of facts. She is talking professionally and presents the official version, whereas Trump sometimes accepts things about the official version which weakens his arguments with me but might strengthen him with the public," she said.

On the other hand, she explained, the Republican presidential nominee did occasionally manage to tell the truth and sometimes he almost "got there" against the totally fictional propaganda version presented by Clinton.

However, Diana Johnstone noted Trump's other mistakes in the second round of debates.

Clinton Wins Over Trump in 2nd US Presidential Debate - Poll
"For instance, I think he made a mistake in referring to Obama and the red line", she said. "Obama is very criticized in the US for not having bombed Syria in 2014. And nobody speaks any more about the fact that Russia then offered the US a face saving way to get out by getting rid of the Syria's chemical weapons," the writer said.

Nobody talks any more about the fact that it was proved that these chemical attacks were not made by the Assad government, she added.
The same was reflected in the report made by other experts, including MIT (the Massachusetts Institute of Technology).

"But people go right on repeating the propaganda version that has been disproved. And Trump does not voice against that," Johnstone noted.

The US establishment, she said, pursues its policy and its effort to create a "New Middle East" and to destroy Iraq.

This is the fictional version that Clinton refers to and people recognize it because she is repeating all the lies that they are used to hearing, they are familiar with this story, she added.

Trump has more difficulty because what he was saying is not so familiar to the public, she explained. However he did not come out with the whole truth.

Clinton Claims Russian Aggression Keeps War in Syria Going On
The political writer further explained why Clinton has a better chance of success.

"Clinton is the US establishment candidate. All of Wall Street is behind her, the media, they are all linked to each other, the military, the industrial complex. They give her a free pass," she told Sputnik.

Diana Johnstone also commented on the US' recent push to introduce a no-fly zone in Syria.

"All the recent flurry in the UN Security Council about the no-fly zone resolution, which they knew Russia would veto, was aimed at preparing the argument that 'we wanted to do something to save the Syrian people,'" she said.

However it is make-believe that Assad is bombing his own people, she added.

"The Russians vetoed it. So now we have to act without the Security Council," she suggested, referring to the US reaction to the Russian veto of the proposed no-fly zone.

"That's the argument they used to detach Kosovo from Serbia. They couldn't go to the UN because Russia would have blocked them from that humanitarian action, which was destructive towards Serbia which resulted in the US making Kosovo a client state with a huge US military base there," she said.

Now everything indicates that Clinton has supported a no-fly zone all along, she added. And the no-fly zone means that government can't fly but the US can, which actually means that "they can't use their aviation and we can go bomb them," she finally stated.