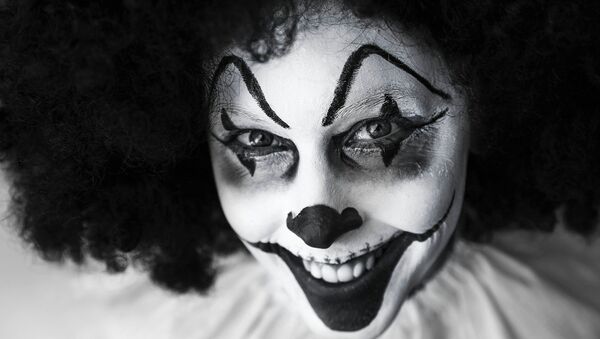 A US-inspired craze is causing chaos in Britain after police forces across the country issued warnings about so-called "killer clown" pranks.

The craze appears to involve people dressing up as clowns. Not like your common big top circus clown — but scary gruesome Stephen King style clowns who then terrorize members of the public.

​In just 24 hours, Thames Valley Police in the south of England reported 14 incidents of people being frightened by clowns.

#killerclown is not "cool", it's not "funny" and following school children & causing fear is not acceptable. https://t.co/bvbwyZjGi5

​"Their actions cause fear and anxiety to other people, this could be perceived to be intimidating and threatening which could lead to public order offences, arrest and a criminal record," Chief Superintendent Andy Boyd, Thames Valley Police said.

"While we do not want to be accused of stopping people enjoying themselves, we would ask those same people to think of the impact of their behavior on others and themselves," he added.

Chief Superintendent Boyd also added that dealing with clowns was a "waste of resources."

Incidents across the UK have so far included schoolgirls being approached by gruesome looking clowns and invited to a birthday party — a typical diary event for the average professional clown — but scary coming from someone who is just wearing a gruesome clown mask.

Fam these clowns are in the UK😳 pic.twitter.com/oSuQCoWtsb

There have also been reports of "killer clowns" jumping out and scaring children, others being chased by "several people dressed as clowns," and so-called clown sightings in London, Cheshire, North Wales, Manchester, Sheffield and Norwich.

'They Are Not Clowns'

Sightings of people, according to a professional clown who works in London, that should not be referred to as clowns at all.

"The title 'killer clown' is a misnomer," Rhubarb The Clown told Sputnik.

"This is a person or a number of people who wear masks with grimacing faces, they are not clowns. They're crazy people wearing clown masks, which is very different to being an actual clown," he said.

​Rhubarb The Clown, also known as Martin Solity, has been a professional clown, entertaining adults and children for forty years.

"For me, it's about putting smiles on people's faces." However stories involving so-called killer clowns are damaging to a clown's reputation, according to Rhubarb. "I have been a clown for over 40 years and I have never once worn a clown mask, I wear make-up. From what I gather, one perpetrator just wore a grey tracksuit with a clown mask."

"No clown would wear grey tracksuit bottoms. He was just wearing a mask and that is not clowning."

​"When Kim Kardashian was robbed by people dressed in police uniform, people didn't say 'crazy policemen' robbed Kim Kardashian. But when someone puts on a clown mask, they're considered to be a clown, and that is just wrong," Rhubarb told Sputnik.

​"These people should not be called clowns."