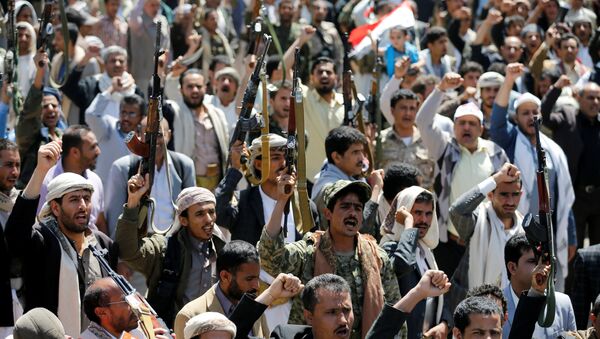 Tens of thousands of people in Yemen participated in demonstration in front of a local UN office in the capital city of Sanaa after Saudi airstrike that killed over 140 people., according to local media.

UN Secretary General Condemns Attack on Funeral in Yemen Blamed on Saudi Arabia
MOSCOW (Sputnik) — Tens of thousands of people in Yemen joined a protest held in front of a local UN office in the capital city of Sanaa following a deadly airstrike on a funeral ceremony, local media reported.

On Saturday, the airstrike hit the funeral ceremony in Sanaa, According to UN estimates, the attack claimed over 140 lives and left more than 525 people wounded, while media suggested that 213 people may have been killed. The Saudi-led Arab coalition denied allegations of the Houthi rebels that it was involved in the incident.

According to the al Masirah television channel, the protesters carried Yemeni flags and posters, condemning the actions of Saudi Arabia.

US Reviews Support to Saudi Coalition after Funeral Massacre Kills 200+ in Yemen
UN Secretary General Ban Ki-moon condemned on Saturday the airstrike and called for "a prompt and impartial investigation of the incident.”