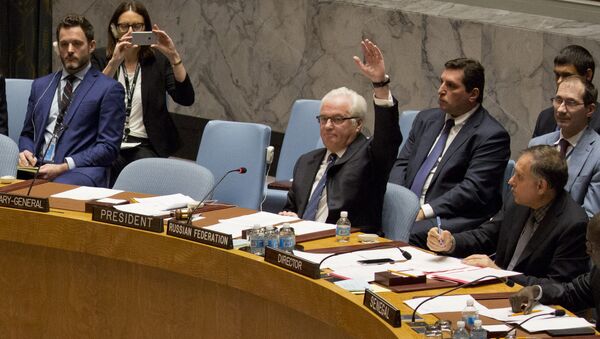 © AFP 2022 / DOMINICK REUTER
Subscribe
On Saturday, Russia exchanged blows with the US and its allies at the UN Security Council over the Syrian crisis. See if you can spot the difference in the approach of the two respective sides.

On October 8, as expected, Russia vetoed a French-drafted Security Council resolution calling for an immediate halt to airstrikes over the city of Aleppo in northern Syria.

According to the Russian Foreign Ministry, Russia blocked the resolution, as it promised it would, because its text "grossly distorted the actual state of affairs" in Syria, and carried a "politicized, unbalanced and one-sided nature. The blame for the escalation of tensions in Syria was placed on the shoulders of the country's authorities."

But more importantly, the Foreign Ministry emphasized, by proposing a no-fly zone over Aleppo, the resolution "made a blatant attempt…to provide cover for Nusra Front terrorists and the militants amalgamated with them, in spite of UN member states' obligations to combat terrorist threats with the use of all available means."

Russia Blocks French UN Security Council Ceasefire Resolution on Syria's Aleppo
Finally, the Ministry pointed out that the malfeasance and dishonesty of the attempt to pass the resolution off as a response to East Aleppo's humanitarian crisis was proven by the fact that over the last two months, radical militants, not the Syrian government, were the ones to deliberately stop humanitarian convoys getting through to the area, while the Western-supported opposition forces have purposefully stalled efforts to resume inter-Syrian peace negotiations.

Prior to the vote, Russian Ambassador to the UN Vitaly Churkin suggested that the French draft seemed to have been deliberately designed to provoke the Russian veto. This was the fifth time that Russia has used its veto right in connection to the conflict in Syria over the course of the brutal five-year conflict in that country.

But the drama in New York didn't end there. After blocking the French initiative, Russia introduced its own resolution, based on an idea by UN Special Envoy on Syria Staffan de Mistura to get Nusra Front terrorists withdraw from Aleppo altogether. This, de Mistura assumed, would bring down the level of violence in militant-controlled portions of the city and allow for the resumption of the Russian-US sponsored ceasefire of September 9.

China Supported Russian Security Council Draft Resolution on Syria
Russia has repeatedly criticized Washington for failing to live up to its side of the September 9 agreement in separating so-called 'moderate opposition' forces from terrorists, including Nusra (which has rebranded themselves as Jabhat Fateh al-Sham or 'Front for the Conquest of the Levant', but is comprised of the same jihadi terrorists).

Russia's resolution went to a vote, but received only four votes in favor among the Security Council's fifteen members. Of the permanent members of the Security Council, only Russia and China voted in favor of the Mistura-inspired proposal. Among the rotating members, Venezuela and Egypt also supported the Russian initiative, with Angola and Uruguay abstaining. The rest of the Security Council, including the US, France, the UK, Japan, Spain, Malaysia, New Zealand, Senegal, Ukraine voted against the measure.

On Saturday, both the Western and Russian resolutions on Aleppo failed spectacularly. But they served to confirm Moscow's growing suspicions that Washington and its allies would rather support outright terrorists (and a 'former' affiliate of al-Qaeda, no less) than accept the continued existence of Syria's secular government.