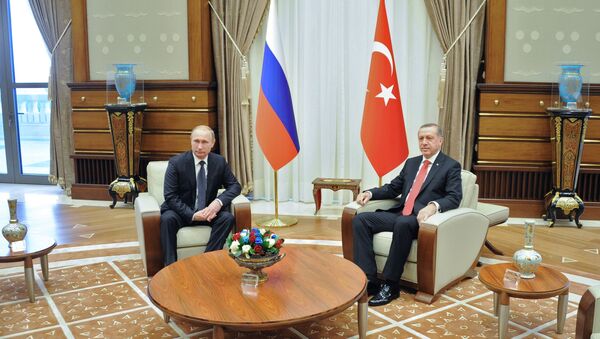 Russian President Vladimir Putin is scheduled to visit Turkey for the first time since the relations between two nations soured following the downing of a Russian bomber over Syria by a Turkish fighter jet.

Turkey Calls on Russia to Maintain Dialogue on Syria Despite Differences
On October 10 Russian President Vladimir Putin is expected to meet with Turkey’s President Recep Tayyip Erdogan, and to deliver a speech at the World Energy Congress, which is being held in Istanbul.

The two leaders will discuss the current events in the Middle East and in Syria, as well as bilateral relations between Turkey and Russia and joint energy projects, including the potential revival of the suspended Turkish Stream natural gas pipeline.

Ahmet Berat Çonkar, Turkish MP and member of the ruling Justice and Development Party (AKP) told Sputnik that Putin’s visit to Turkey after the two countries managed to overcome the crisis in bilateral relations is a momentous event of great strategic importance.

"Right now there’s a process of making alliances and making decisions regarding the balance of power going on in our region. The humanitarian situation in Syria has become intolerable, and we must put an end to the bloodshed and destruction. As a representative of the Turkish side, I believe that we and Russia should overcome the difference of opinions regarding this issue. By conducting its (military) operation, Turkey has shown that it greatly values Russia’s stance on the fight against Daesh. Turkey displays its unwavering determination to battle radical terrorist groups that pose the biggest concern to Russia. And I hope that Russia, being aware of that fact, will treat Turkey’s approach to the Syrian issue with greater understanding, and will adhere to a balanced policy which supports the process of political transition," Çonkar said.

He added that hopefully everything will occur according to his predictions, as Russia and Turkey must simply overcome the current crisis.

"The Middle Eastern region is our region; the events that transpire here directly affect both Russia and Turkey. Radicalization and instability here have a negative impact on Russia, Turkey and on the region as a whole. Therefore, I believe that Russian President Vladimir Putin’s visit will help bring Russia and Turkey together in search of a way to resolve the Syrian issue," he said.

All in all, Çonkar remarked, despite a certain difference in opinions about how the Syrian conflict should be resolved, Russia and Turkey can still cooperate on this issue, while the mistakes committed by the US in the Middle East are plain for all to see.

"I believe that the growing strategic rapprochement between Russia and Turkey will also have a certain positive influence on the US approach to the Syrian issue. We are regional players, nations that spent millennia building close relations in this area and know the region from the inside out. The United States, however, is a new player in the region, and has already committed mistakes that made many problems here even more difficult to solve. We can see it everywhere in the region – in Iraq, Syria, Libya and in Yemen. We can see that the US failed to contribute to resolving the problem. In that regard, by adhering to a joint strategy for resolving the Syrian crisis, Turkey and Russia may nudge the US to help preserve stability in the region," Çonkar explained.

He insisted that it is imperative that Turkey and Russia reach an agreement on the political transition process in Syria, and develop a joint approach to dealing with organizations that threaten the stability of the war-torn nation. He added that the countries that play a decisive role in this process are Turkey, Russia and Iran, while the United States may contribute by understanding the mistakes it made in the region and by supporting the chosen conflict resolution plan.

"If such major regional powers as Turkey, Iran and Russia display their unwavering stance on this issue, I believe that the West and the US would have to adhere to it. If we will assume the directing role, if we can stop the bloodshed, then we’ll score a major victory for our nations and for the entire region; not to mention that from a global perspective, it’ll help prevent new conflicts from sprouting in the region," Çonkar concluded.