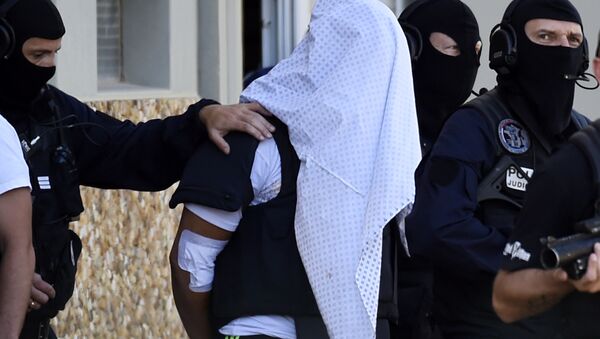 At least 15,000 people are on a French database of individuals suspected of involvement in Islamist terror networks or radicalism, French newspaper Le Journal du Dimanche reported on Saturday.

Nice's Terror Attack, Turkish Coup Attempt ‘Links of the Same Chain’
At least 15,000 people in France are thought to pose a terror threat and are under the surveillance of the security services, French newspaper Le Journal du Dimanche reported on Saturday.

The suspects have been placed on France's FSPRT database of individuals suspected of involvement in terrorism or radicalization, created in March 2015. The database is managed by France's UCLAT unit for the co-ordination of the fight against terrorism.

Around 2,500 terror suspects and radicals are under surveillance without any further action taken against them, and over 2,000 of those on the list are known to be members of a terrorist network. About 4,000 of those on the list are considered high-risk and are being watched by France's General Directorate for Internal Security intelligence agency.

Eight French departments are home to more than 300 reported radicals or terrorists. Approximately 2,700, or 18 percent, are under the age of 18 – the youngest is just 11 years old.

"No less than 20 people (on the list) may have left the country since the beginning of the year. This is a significant decrease. Since January 355 people with connections to terror networks have been detained by our intelligence services," ‎he told the newspaper.

Cazeneuve added that 700 French citizens are currently in conflict zones Iraq and Syria, of whom 270 are women and 17 children.

France has suffered a spate of terror attacks which have killed hundreds of people over the past two years, including the January 2015 Charlie Hebdo attacks, the November 2015 Paris attacks, and the Bastille Day attack in Nice in July.

On Bastille Day in Nice which Tunisian-born Mohamed Lahouaiej-Bouhlel drove a cargo truck into crowds at the seafront, killing 84 people. Less than two weeks later two radical Islamist terrorists brutally murdered a Catholic priest in his church in Normandy.

France Urges Patriotic National Guard to Fight Jihadi Threat at Home
Dr. Didier Leroy, a leading terrorism researcher at the Royal Military Academy of Belgium told Radio Sputnik that the methods used by the terrorists to attack in Nice and Normandy demonstrated the effectiveness of France's counter-terror operations, but also the inherent difficulties of stopping all terror attacks.

"Leading an attack in France has become more and more difficult, so the assailants are resorting to less monitored tools. Renting a lorry is not illegal, walking around with a knife is not illegal, so by doing so you make your attackers very difficult to attack and be detected," Leroy said.

However, the French police are "overwhelmed by the amount of individuals they are supposed to be monitoring 24/7," and are in need of more resources given the scale of the problem.

In the aftermath of the Nice attack in particular the French government came under fire from opposition politicians for failing to do more to increase public security and prevent terror attacks.

In the at response to the criticism, Cazeneuve gave a list of laws and extra police forces created under French President Francois Hollande "to face a threat that France was not prepared for" when he succeeded Sarkozy in 2012.

In July Hollande also announced the formation of a French National Guard from existing reserve forces to better protect citizens facing terror attacks. Hollande, together with Cazeneuve, called on "all willing French patriots" to sign up as reservists.