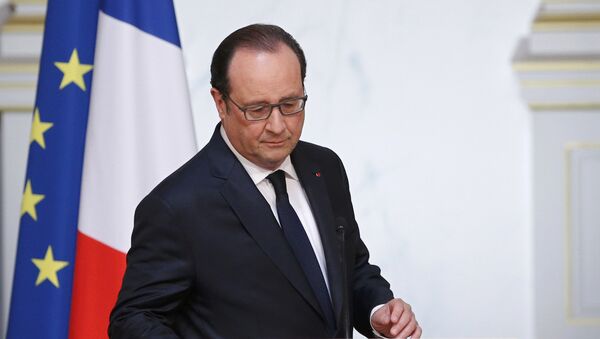 Merkel, Hollande Talk Tough on Brexit Despite Facing Growing Opposition
MOSCOW (Sputnik) — French President Francois Hollande has called on the European Union not to let the United Kingdom leave the bloc without paying a high economic price, in particular by loosing access to the European single market.

"We need to remain strong. If not, we will threaten the very principles of the European Union. That could lead to other countries or regions wanting to leave the EU to gain so-called benefits but without any inconvenience or rules… Now, the UK wants to leave and pay nothing. It’s not possible," Hollande said as quoted by the Independent newspaper on Friday.

A number of EU leaders have already stated that the United Kingdom will lose its access to the single market unless it keeps freedom of movement rules. On Sunday, UK Prime Minister Theresa May suggested at the Conservative party conference that the country’s exit from the European Union would be a "hard" rather than "soft" Brexit, meaning that control over immigration would be prioritized over the access to the European single market.

May Wants UK Brexit Deal With EU to Include Free Trade, Anti-Terror Cooperation
On June 23, the nationwide referendum on EU membership was held in the United Kingdom, in which 51.9 percent of voters said the country should leave the bloc. May promised to start the procedure of leaving the European Union by the end of March 2017. The negotiations with Brussels will take up to two years.

Brexit supporters have used the migration issue as one of the main arguments to persuade people to vote for leaving the European bloc.

In July, Hollande said that the United Kingdom would not have access to the European single market after Brexit without respect to the freedom of movement.