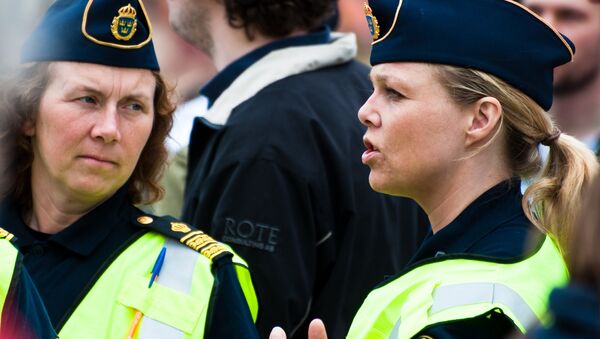 © Flickr / Erik
Subscribe
Public security seems to have become a major issue in Sweden, which has traditionally enjoyed the reputation of being a peaceful place. However, one third of Swedish municipalities now hire private companies to provide security in public places; many officials cite a reduced police presence as the reason, a recent survey has shown.

Perennial Police Problems: Swedish Cops Quitting in Droves
A total of 208 Swedish municipalities participated in the survey about the hiring of security guards to patrol public places in order to provide security, which was conducted by Swedish Radio. Sixty-five municipalities, that is about a third, answered affirmatively, whereas dozens admitted to having such plans. A number of municipalities indicated a reduced police presence as the reason.

Sigtuna Municipality, which lies between Stockholm and Uppsala and has a population of 45,000, was reported to be spending over 3 million SEK annually ($350,000) on extra security guards.

"The visible police resource in the municipality has been gradually reduced, and the need for uniformed personnel that make the residents feel safe has increased. Given this, the municipality doesn't have many options left other than to turn to private security companies," Thomas Mileborn, head of security in the municipality of Sigtuna, told Swedish Radio.

Danish Police Resources Stretched Thin Amid Surge in Violent Crime
A lack of police personnel has left undesirable security gaps across Sweden, which is why the perceived need for security in municipalities has risen, Björn Ericsson, an industry expert at Almega Security, pointed out.

"In the past year, this [the procurement of public security services] has become very common. The security issue has come into focus more than ever. Municipalities want security officers in public places to prevent crime and provide security," Björn Ericsson told Swedish Radio.

Predictably, the survey's findings stirred criticism in Sweden, where the state is expected to guarantee citizens' security. According to Alice Teodorescu, a columnist from the Swedish daily newspaper Göteborgs-Posten, the fact that municipalities have to pay extra for measures that should be included in police's core mission is downright astonishing.

"Even more serious is that the citizens of a welfare state, with one of the world's highest tax burdens, can no longer put their faith in the state for performing its part of the social contract. How will tax morale be affected as citizens realize that they are expected to pay increasingly for a construction that gives less and less in return?" Teodorescu asked rhetorically.

Sweden to Adopt New Consent Clause to Jail More Sex Offenders
Meanwhile, Lars Tonneman, head of the Police Legal Entity, was unfazed by the public's ire at the police's ineptitude. According to Tonneman, the tasks that require the intervention of police have increased.

The Swedish police force, which has found itself dealing with underfunding and the raging migrant crisis, is plagued by severe staffing problems. At least three Swedish policemen quit each day, mostly citing low wages, an excessive workload and job-related stress. With a constantly shrinking police force of under 20,000, Sweden is believed to be incapable of dealing with the issues of terrorism, organized crime and the migrant crisis.

​Aside from nascent terrorist threats, some of the hardest challenges to meet for Swedish police are the 65 officially recognized "exclusion areas," which are in effect ghettos with lawlessness and heavy crime. In these "no-go zones," police and fire brigades are often met with clubs and stones.

To this should be added that the Swedish police, despite the allocation of several billion kroner extra, currently have the lowest crime detection rate in 16 years. In 2015, the police only solved 14 percent of crimes, compared with 18 percent five years ago. The decline is manifest in all police regions and all crime categories.

000000
Popular comments
New World Order, only the chosen ones have a right to security, the rest must go with often corrupt officials who are there to protect anyone, but to keep the masses in lines...
Marques rouges
7 October 2016, 12:44 GMT
000000
Sheer and obvious erosion of the state. There are no borders, there are no laws for some either. Now just disband the police while you're on it. But lets not be too critical. It's not trendy. Lets continue to be mindless liberals and keep destroying European societies.