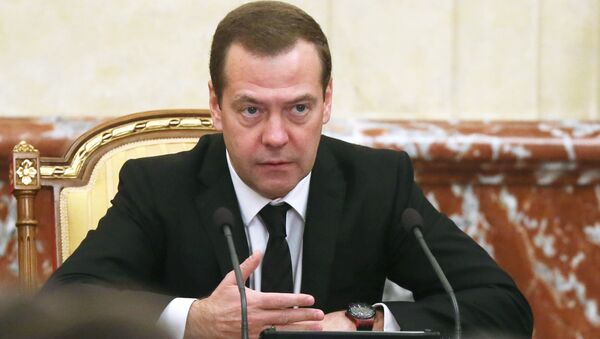 © Sputnik / Ekaterina Shtukina
/
Go to the photo bank
Subscribe
Russian Prime Minister Dmitry Medvedev said that Russia's 2017-2019 budget is being drafted based on assess of the economic situation in the world markets from a conservative viewpoint.

GORKI (Sputnik) — Russia's 2017-2019 budget is being drafted based on a cautious outlook and the assumption that US and EU sanctions will remain intact, Prime Minister Dmitry Medvedev said at the government commission on budget projections Friday

"As has been repeatedly discussed, we cautiously assess the economic situation in the world markets from a conservative viewpoint. In particular, over the fairly low trajectory of oil prices in the range of $40 per barrel of the Urals brand over the next three years, and the possible retention of sanctions until the end of the forecast period," Medvedev said.