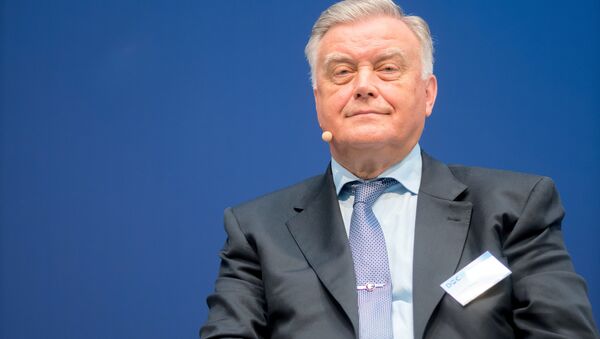 This year’s Rhodes Forum, the first held under the auspices of the Dialogue of Civilizations Research Institute (DOC), attracted more than 300 participants from across six continents. RIA Novosti spoke to the DOC president, political expert and former head of Russian Railways Vladimir Yakunin, about the issues raised at this year's event.

Q: How has the world changed in the 15 years since you established the DOC initiative, and how does this year’s Rhodes Forum reflect those changes?

A: This year the World Public Forum Dialogue of Civilizations was reorganised as a think-tank under the name of the Dialogue of Civilizations Research Institute. The Forum’s key values remain the same. They are unscripted, open, free discussions; the bringing together of sometimes opposing but always well-argued opinions; and profound respect for one’s interlocutors and the desire to find the right points for dialogue.

The world has of course changed in the past 15 years. The geopolitical situation has worsened, and relations between states have become more strained.

Clashes of civilisations have been predicted before. What no-one predicted was that a genuine anti-civilisation could be created under the cover of religious fervour and religious dogma, but having nothing in common with either religion or humanism or even with simple material desires.

One event in particular left its imprint on the global economy – the crisis of 2008. At the time we said that working together was the key to avoiding a second wave of the crisis. And we were right.

Most importantly, of course, we have seen events driven by something that previously we had no experience of, i.e., intra-civilizational conflict, such as the splits that we have seen in Europe as a result of an influx of migrants who do not adapt or assimiliate and do not become equal members of their host societies.

Q: The DOC’s research agenda includes a call for alternative economic models in light of the challenges that conventional models have faced in the last decade. Does money really rule the world, do you think? And how can more human-oriented indicators be accommodated and factored into decision-making on key issues?

The DOC’s research focuses on the opposition between different models of development, i.e., statistical GDP growth and development as a set of economic measures to create suitable and necessary infrastructure for people’s lives.

There is some research (not ours) which has shown that as few as 150 international corporations own almost half of the global economy. People are unhappy with this, and there is some soul-searching going on as people look to move away from the politics of value to the politics of values. Civilizations are measured in thousands of years, which has inevitably led to the development of human society as a whole as well as individuals themselves. In this sense, it does not really matter whether a person believes in God and follows his commandments, or whether she or he believes in the development of humankind out of considerations of humanism, our shared humanity, dialogue and peace.

We have a number of research areas that look at issues such as globalisation and its role in the spread of conflicts. In practice the DOC operates on a principle of “solidary development”, which is a methodology for dialogue that helps to explain what we need to do to reduce tensions. We are also currently developing a Dialogue Index.

Q: Given its historically good relations with a number of states in the Middle East, can Russia act as a mediator to avert all-out war and to mend relations between Saudi Arabia and Tehran?

A:The conflict between Sunni and Shiite Islam has been going on for hundreds of years. Mediation only makes sense when both sides are interested in resolving a conflict, and are looking for a reliable, respected partner who is acceptable to both sides, and who is able to do it. Given Russia’s historical relations with the region and position in the Middle East I think that Russia could play this role. But for this to happen, it is essential that all parties – warring parties, those involved in low-level conflicts, and all of the other players in the region – should have a genuine interest. An imposed solution will not work here. Recently the DOC hosted a round table with Sunni and Shiite participants. This is an example of how we can create the public and social space for dialogue.

Russia began military operations in Syria a year ago. How has the balance of forces in the region changed during this period?

As a political analyst, it is abundantly clear to me that the situation has changed with the involvement of Russia’s Armed Forces. And as Professor Fred Dallmayr, an American participant of the Rhodes forum, pointed out, they were asked to get involved by the current legally elected Syrian government.

It is notable that since Russia began targeting convoys of illegal oil being carried out of ISIS-controlled territory, that others have also followed suit. Previously it would seem no-one knew anything about this. But given the current state of the financial system, in which every dollar, euro or real can easily be traced, I cannot see how previously it was not possible to cut off financing to ISIS and terrorist organisations.

Q: How would you propose to shut down these channels now? And most importantly, when and how will the war in Syria come to an end?

A: The Japanese have a proverb: “The fortune-teller knows not his own fate” (uranaiya minouye shiradzu). In this sense, making predictions is something of a fool’s errand. On the other hand, simple logic would dictate that Russia has learned its lessons from historical experience, particularly in Afghanistan, and that the country’s policy is constructed in compliance with the letter of international law, given that the outcome of the fight depends in large degree on this.

Rather, I would stress – and this is one of the issues we discussed at the Rhodes Forum – that international powers are not dealing here with a conventional opponent. Seventy years ago we found ourselves in a similar situation, and then those countries that considered themselves to be civilised were able to join forces, despite their adherence to two diametrically opposed and irreconcilable ideologies. Roosevelt and Churchill, who were committed anti-Soviets, formed a coalition against Hitler with the communist Stalin. Unfortunately, what we are seeing today is rather the opposite, and Cold War rhetoric is being ratcheted up.

It seems to me that not everyone has recognised that we are dealing here not with simple religious extremism, which for better or for worse is preached by various religious teachers, but with a new social – not religious – form of barbarism that in today’s world should give us extremely serious pause for thought.

Q: How does the DOC see the potential impact of the US election? Will Russia really benefit if Trump wins? Will US-Russia relations worsen under Hillary Clinton? Do you believe Trump can really win? And could that lead to a swift removal of sanctions against Russia?

A: If one of my friends in America – and I have a lot of old friends there – called me up and asked, “Listen, Vladimir, who do you think is the better candidate?”, and if I knew for sure that this could influence something, then I would probably give a very simple answer. The more complex answer, though, is that it depends on what the world wants or does not want – the stability of the US political system affects political stability around the world. And based on the US presidential race to date, it seems clear that societal tensions are increasing, which many DOC researchers believe could have a significant impact on political stability both in the US and globally.

Q: There was some discussion on the sideline of the Forum about Russia and Ukraine and related issues. Do you believe that the two sides can be reconciled, and how long will it take? What does Russia have to do to bring this about?

A: People at the Forum talked less about Russia or any other country than they did about processes, about how we should think about these processes, and how to structure and prevent increased tensions. Earlier this year we carried out a study, which we haven’t published, that took statistics from a number of different sources on the Ukraine crisis. The results were quite unexpected. Even when the conflict in Ukraine was at its height, more than 50% of respondents even in Western Ukraine said they had a positive opinion of Russians, and more respondents felt positively than negatively about Russia as a state. So in this sense there is hope that the two countries’ common history and shared cultural experience will sooner or later play an important role in fully restoring relations. Especially because I believe that this is the hope of the rest of Europeans as well.