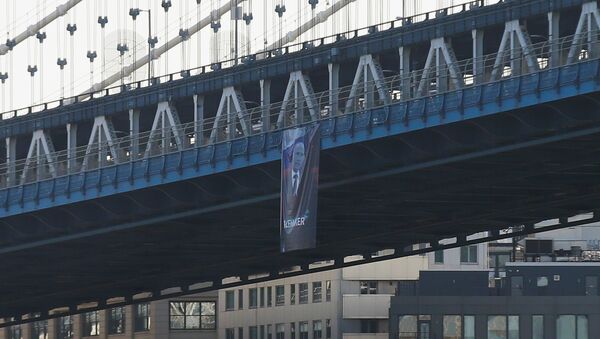 Soon after a massive banner appeared in the Big Apple calling Russian President a "peacemaker," similar signs have also popped up in Dresden and Moscow.

First, "the peacemaker" banner with Putin depicted over the Russian and Syrian flags was seen for a while over the New York City Manhattan Bridge.

A banner with the Russian & Syrian flags & Vladimir Putin in a suit with the phrase "Peace Maker" appeared on Manhattan Bridge in #NY #USA pic.twitter.com/1HMF6MYujz

​​Then, mysterious graffiti was spotted in one German city: the portrait of Mr. President signed with the same "peacemaker" word appeared on a house wall, and not just any house, but the  house Putin lived in in during the 1980s, while working in Dresden as an undercover head of the House of Friendship of the USSR and GDR.

​And finally, some other unknown activists hung a banner featuring Putin in Moscow. The Russian President's photo on the Syrian flag with a slogan thanking Putin for peace was hung from the Krymsky Bridge (or the Crimean Bridge).

​Was this some kind of "flashmob" thought up by some creative people around the world to congratulate Vladimir Putin on his 64th birthday. Or, was it an attempt to unofficially call him a better candidate for the Nobel Peace Prize 2016? For better or for worse, the organizers and their original idea remain unknown.