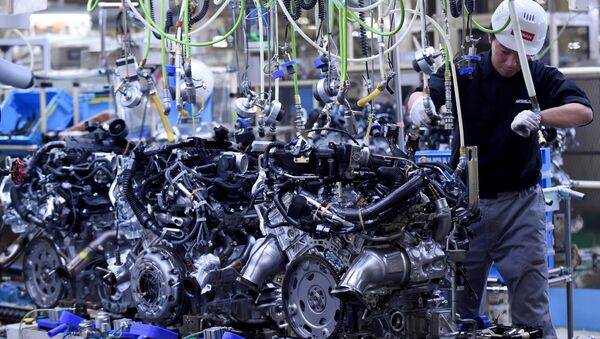 © AFP 2023 / TORU YAMANAKA
Subscribe
International
India
Africa
Almost 25 percent of staffers at firms in Japan log at least 80 hours overtime every month, according to the first ever government report that looked into the issue of working too much, local media reported.

Asia
Japanese Prime Minister Calls on Parliament to Ratify TPP Before Other Countries
MOSCOW (Sputnik) – The white paper quizzed 19,583 employees from 1,743 companies on their working hours between December 2015 and January 2016, the national Kyodo news agency said.

It found that 23 percent of employees worked an extra 80 and more of usually unpaid hours per month. Of those, 11 percent put in between 80 and 100 hours overtime, and 12 percent worked more than 100 hours.

The government-endorsed study was conducted after a law came into being in November 2014 requiring that the cabinet take measures to prevent deaths and suicides caused by stress at work, also known as "karoshi."