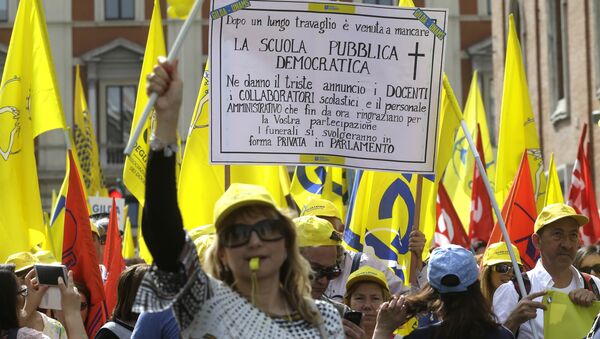 The educational reform program, entitled "Good School" was initiated by the country's government in 2014. It envisages, above all, introducing private sector funding of schools, maintaining the system whereby increases teacher wages are based on job seniority and bringing in unpaid apprenticeships for students studying technical subjects.

The protests are, in particular, held in Rome, Florence, Bologna, Milan, Naples, Venice and Palermo, the RaiNews24 TV channel reported.

The protesters are demanding to adopt a national law granting everyone the right to get free and high-quality education, according to the broadcaster.

Italian Riot Police Brutally Clash With Protesters (PHOTOS, VIDEO)
Other media outlets claim that small clashes with police occurred during a rally in Rome as students tried to change the agreed route and used smoke grenade. However, the police quickly took the situation under control and the demonstration continued without any incidents.

In Milan, tensions arose when students started to explode firecrackers as well as used smoke grenades. They are also reported to have pelted the Turkish Consulate building with red paint, shouting slogans against Turkish President Recep Tayyip Erdogan.

The demonstrations are the first ones in a series of protests by students and teachers of Italy scheduled for this fall. A national strike of teachers, for instance, is expected to take place on October 21.