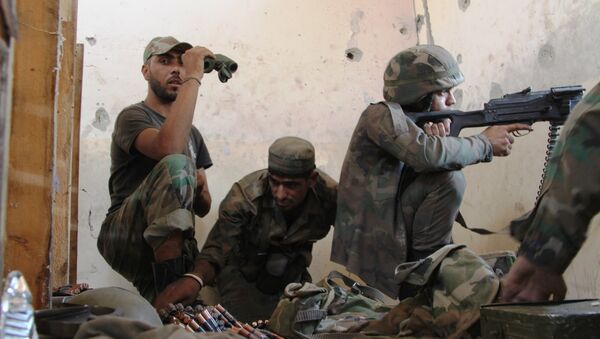 © Sputnik / Mikhail Alayeddin
/
Go to the photo bank
Subscribe
The US' efforts to separate "moderate rebels" from radical extremists in northern Aleppo largely failed because there aren't any "moderates" in the region, experts assume, adding that Washington is taking efforts to prevent the Syrian Arab Army from liberating Aleppo.

Ghosts of Vietnam: US Military Solution in Syria 'Not the Way Forward'
Washington has failed to separate so-called moderate rebels from terrorists in Syria; furthermore, the US leadership has repeatedly tried to divert public attention from the fact that "moderates" have been spotted cooperating with designated foreign terrorist organizations including al-Qaeda affiliates and Daesh (ISIS/ISIL), Bangkok-based geopolitical researcher and writer Tony Cartalucci noted in his article for New Eastern Outlook.

Instead, Washington has shifted the focus of its narrative to the humanitarian crisis unfolding amid final operations to restore security to the northern Syrian city of Aleppo, Cartalucci stressed.

"The operation however, headed by Syrian forces [the Syrian Arab Army] and supported by its allies including Russia, aims to bring the last remaining districts of the city under government control. Already, the vast majority of Aleppo's remaining 2 million residents live in government controlled territory, with less than a quarter of a million trapped in terrorist held sections of the city," the geopolitical analyst emphasized.

Syria 'Refusing to Kneel Before Foreign-Backed Terrorists'
In his recent interview with RT Bashar al-Jaafari, the current Permanent Representative of the Syrian Arab Republic to the UN, specified that "1.75 million people [in Aleppo] decided to live in the areas under government control because they feel safer," while "about 275,000 civilians unfortunately were taken hostage by the terrorists of al-Nusra Front and Jaish al-Fath."

However, the Syrian Arab Army's efforts to liberate Aleppo from terrorists have been presented by the Western media as "Assad's aggression" against Syrian civilians.

The Washington Post reported Tuesday that the White House is considering launching "limited military strikes against the regime as a means of forcing Syrian dictator Bashar al-Assad to pay a cost for his violations of the cease-fire, disrupt his ability to continue committing war crimes against civilians in Aleppo."

What is more important, however, "the fall of Aleppo would undermine America's counterterrorism goals in Syria," an unnamed senior administration official told the media outlet. 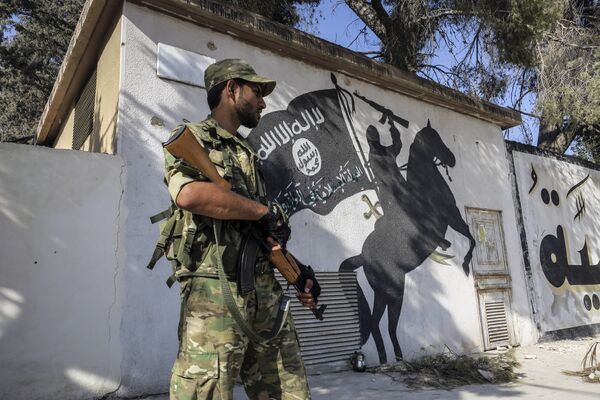 A Free Syrian Army fighter stands in front of a painting left by IS militants in Jarablus, Syria (File)
© AP Photo

Perpetual Wars: US Democracy Experiencing Deep Systemic Crisis
Russian online newspaper Vzglyad's observers Andrei Rezchikov and Mikhail Moshkin suggest that the US leadership will do whatever it takes to prevent the Russian-backed Syrian Arab Army (SAA) from liberating Aleppo.

The observers quoted Russia's former deputy general secretary of the UN, Sergei Ordzhonikidze who told RIA Novosti that Washington "does not want the Syrian [Arab Army] forces to retake Aleppo [from Islamists] with [Russia's] assistance."

The crux of the matter is that in the event of this, extremists of all sorts would be eventually defeated in the region, he explained; thus far, Washington is taking every effort to prevent such an outcome.

Ordzhonikidze's remarks come as UN High Commissioner for Human Rights Zeid Ra'ad Hussein called for the UN Security Council to limit permanent member states' veto power "as a way to resolve the humanitarian crisis in the Syrian city of Aleppo."

Ordzhonikidze suspects that Washington could have been behind Hussein's initiative, seeking to limit Russia's veto power in the UN Security Council.

UNSC Members' Veto Power Key to Global Power Balance - Russian Foreign Ministry
It is worth mentioning that the initiative was voiced after the US' unilateral decision to halt cooperation with Russia on Syria, Rezchikov and Moshkin highlighted.

Commenting on the matter Russia's Foreign Ministry spokeswoman Maria Zakharova reminded journalists that "having the veto [right] is not a privilege but… an issue of the balance of power."

According to Cartalucci, the root of Washington's unusual affection for "moderate Islamists" goes deep into history. He quoted Pulitzer prize-winning journalist Seymour Hersh, who shed light on the Bush administration's plans aimed against Iran and Syria in his 2007 article.

"To undermine Iran, which is predominantly Shiite, the Bush Administration has decided, in effect, to reconfigure its priorities in the Middle East… The US has also taken part in clandestine operations aimed at Iran and its ally Syria. A by-product of these activities has been the bolstering of Sunni extremist groups that espouse a militant vision of Islam and are hostile to America and sympathetic to al-Qaeda," Hersh wrote.

"[Saudi Prince] Bandar [bin Sultan] and other Saudis have assured the White House that 'they will keep a very close eye on the religious fundamentalists. Their message… was 'We've created this movement, and we can control it'," the investigate journalist revealed.

Remarkably, a 2012 Defense Intelligence Agency's report released by Judicial Watch shows that the Obama administration has been aware since the outset that major driving forces behind the Syrian turmoil were Salafists, the Muslim Brotherhood and al-Qaeda in Iraq.

"The 2007 report clearly explains why the US cannot 'separate' its alleged 'moderate rebels' from al-Qaeda and its various affiliates — precisely because there were never any 'moderate rebels' to begin with," Cartalucci underscored.