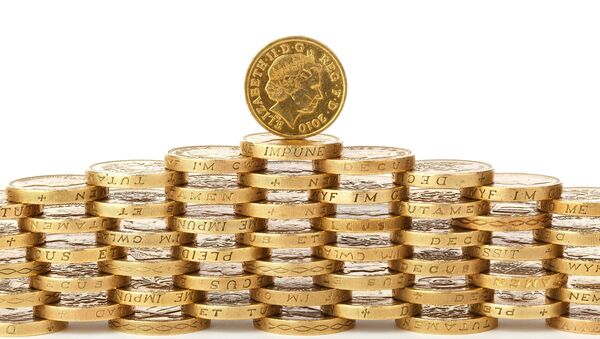 © Photo : Pixabay
Subscribe
In a bittersweet moment this week, the FTSE 100 came close to finishing at an all-time high, but this was all at the expense of the British Pound.

The drop in the value of the pound has lifted the earning potential of some of the UK's biggest companies, who count their revenue in US dollars and dominate the FTSE 100.

However, according to financial experts this is not good news, in fact it may contain more negatives than positives.

The pound has dropped to a 5-year low against the euro https://t.co/wLcBoMj8E4 pic.twitter.com/KkRYcSlHE6

Professor Waltraud Schelkle, a political economist at the London School of Economics told Sputnik about the drop and what it could lead to.

Professor Schelkle said that she was surprised the market had thought the FTSE 100 was a positive thing, given that the drop in value of the pound could lead to other issues.

"The positives are clear; we will have less import competition and stronger exports in goods and services. But you must offset two things, the future of a hard Brexit will mean that some exports and direct foreign investors that use Britain as a gateway into the EU will relocate, and the Japanese government has already said this. Goldman Sachs said they will relocate. The negatives are not unimportant, as always, the markets see the short-term and see export and import as outweighing the negatives," Profrssor Schelkle told Sputnik.

According to Professor Schelkle, in the long run, the UK will see more negatives then positives, specifically in the next 10 years when the country will witness financial losses. The reason we are seeing such a drop in the value of the pound is most definitely down to Brexit, she says:

"Yes, because of Brexit the pound has dropped, however the pound was overvalued and it had to do with Britain being at the financial center of the union, that it is no longer part of. As these financial services take a hit, I think London will stay an international financial center."

Brexit Fears Have Japanese Business Heading Back to Asia
So is there anything that consumers and business can do to help with the sharp fall in the value of the pound?

In short, no. Consumers will have little influence, however, businesses can actually benefit from the weaker pound. However, imports will be more expensive thus affecting consumers' pockets. Professor Schelkle advises that it may be best to plan a holiday in the UK next year as opposed to flying further afield.

This is also an opportunity for the government and the Bank of England to establish clear responsibilities moving forward that will help the country.

"The Treasury and Bank of England need to ease this effect, raise the interest rates for inflationary impact and this will be passed on in domestic prices and import prices will rise. That means the fiscal policy shall ease a little bit to not kill off the weak economy," Professor Schelkle told Sputnik.