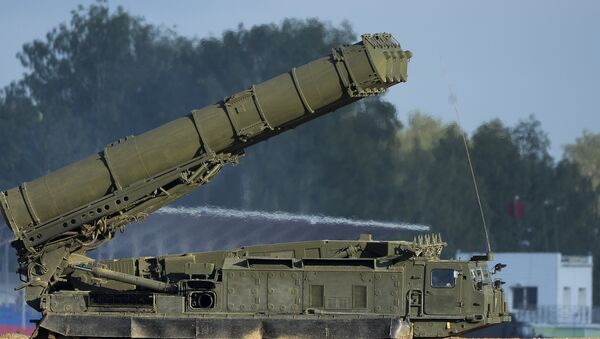 © Sputnik / Alexander Vilf
/
Go to the photo bank
Subscribe
Russia has deployed one of the most advanced anti-ballistic missile systems in its arsenal, the S-300VM "Antey-2500," to Syria to improve security of the Russian Aerospace Forces, but the "purely defensive" complex will also help make the situation in the war-torn Arab country more calm, journalist Evgeny Krutikov wrote for Vzglyad.

This added bonus is due to the psychological effect of a cutting-edge weapon present in the region.

The journalist maintained that the Pentagon is "pathologically afraid" of any losses, particularly high tech losses. If there is even a minimal risk of losing a warplane, the US military will most likely chose not to send it on a mission.

"Although Americans understand that Russian missile defense and anti-aircraft systems are not targeted against Western aviation, they will limit their aerial activities just in case. Perhaps, this could also include unmanned aerial vehicles stationed at the Incirlik base in Turkey," he explained.

Krutikov emphasized that the deployment of the S-300VM to Tartus was a "measured and justified step" for Russia. "In the end, security of the Russian military bases is a top priority" for Moscow, he said. "If it also makes the US Air Force less active in the region, it will be an extra bonus."

This is How 'Extremely Efficient' S-300 Will Boost Russia's Defenses in Syria
The journalist also noted that there indeed was a risk that an arms race in the region could ensue, but stated that this situation was not created by Moscow.

In service since 2013, the S-300V4 (NATO designation SA-23 Gladiator) is meant to track and intercept short- and medium-range ballistic missile, aeroballistic and cruise missiles, as well as fixed-wing aircraft, ECM (electronic countermeasure) platforms and precision-guided munitions.

An unnamed source in Russian military and diplomatic circles told Izvestiya that the S-300V4, an upgraded version of the S-300VM, is primarily geared up for destroying aeroballistic targets and cruise missiles.

The system is reported to have a range of 400 kilometers (nearly 250 miles) and can simultaneously engage up to 24 aircraft or 16 ballistic targets in various combinations. It has been designed and is manufactured by Almaz-Antey, a Russian state-owned defense company.

Jupiter
6 October 2016, 13:40 GMT
000000
I disagree with this version. The S-300 are cheaper than the S-400, and in a confrontation it is complete sure that a missile attack to the Syrian will carry a massive amount of drones (UCAV) as a decoy to mask real lethal missiles that will be travelling together with the drones. Israel used a lot of USA drones in its war with Egypt, and the Egypt army send almost all its SAM missiles to drop down this drone foolishly. Egypt with its SAM depleted, was an easy prey for the Israel air force. I think if there is a confrontation this will be the preferably method of the USA.
landauroj
6 October 2016, 13:50 GMT
000000
Newsfeed
0
New firstOld first
loader
LIVE
Заголовок открываемого материала
Access to the chat has been blocked for violating the rules . You will be able to participate again through:∞. If you do not agree with the blocking, please use the feedback form
The discussion is closed. You can participate in the discussion within 24 hours after the publication of the article.
To participate in the discussion
log in or register
loader
Chats
Заголовок открываемого материала
Worldwide
InternationalEnglishEnglishMundoEspañolSpanish
Europe
DeutschlandDeutschGermanFranceFrançaisFrenchΕλλάδαΕλληνικάGreekItaliaItalianoItalianČeská republikaČeštinaCzechPolskaPolskiPolishСрбиjаСрпскиSerbianLatvijaLatviešuLatvianLietuvaLietuviųLithuanianMoldovaMoldoveneascăMoldavianБеларусьБеларускiBelarusian
Transcaucasia
ԱրմենիաՀայերենArmenianАҧсныАҧсышәалаAbkhazХуссар ИрыстонИронауОssetianსაქართველოქართულიGeorgianAzərbaycanАzərbaycancaAzerbaijani
Middle East
Sputnik عربيArabicArabicTürkiyeTürkçeTurkishSputnik ایرانPersianPersianSputnik افغانستانDariDari
Central Asia
ҚазақстанҚазақ тіліKazakhКыргызстанКыргызчаKyrgyzOʻzbekistonЎзбекчаUzbekТоҷикистонТоҷикӣTajik
East & Southeast Asia
Việt NamTiếng ViệtVietnamese日本日本語Japanese俄罗斯卫星通讯社中文（简体）Chinese (simplified)俄罗斯卫星通讯社中文（繁体）Chinese (traditional)
South America
BrasilPortuguêsPortuguese
NewsfeedBreaking
02:25 GMTNow Serbia: US Evacuates Intelligence Officer Affected by Havana Syndrome - Report
02:21 GMTGOP Rep. Fires Back at AIPAC's Attacks Over Not Supporting Israel's Iron Dome Funding Bill
01:18 GMTUnited Airlines to Layoff 593 Employees for Not Getting Vaccinated
01:05 GMTStudy Shows Massive Drop in Life Expectancy Due to Covid-19 Pandemic
01:01 GMTPhoto: Cuomo Enjoys Fishing Trip With His Dog After Resigning in Disgrace
00:56 GMTLava From Spain’s La Palma Island Volcano Reaches Ocean, Causing Possible Evaporation of Toxic Gases
00:19 GMT‘Making Ourselves Be Respected’: Macron Calls For European Army As US ‘Focused on Itself’
00:01 GMT‘Normal Life’ Won’t Return Without Pfizer’s Annual COVID-19 Vaccine Boosters, CEO Bourla Says
YesterdayUS House Republicans Seek Name of Official Who Approved Drone Strike on Afghan Aid Worker
YesterdayGeorgia Spa Shootings Suspect Pleads Not Guilty to Killings in Fulton County - Reports
YesterdayUS Air Force Chief ‘Hyper-Focused’ on Growing China Challenge in Pacific
YesterdayThere’s a New Sheriff in Town: FC Sheriff Upset Real Madrid in Champions League
YesterdayForgetful Joe Gets His Share of Fact-Checking
YesterdaySterling’s Drop Worries Investors Over State of Economy
YesterdayUS Court Deems Evidence Against Ex-Peruvian President Toledo 'Sufficient' for Extradition - Report
YesterdayACLU Chief Apologizes For Changing RBG’s Quote in Favor of ‘Woke’ Lexis - Report
YesterdayDPRK Claims Tuesday's Missile Test Was of a New Hypersonic Weapon Named Hwasong-8
YesterdayUS Republicans’ Support for Prosecution of January 6 Rioters Plunges 22% - Poll
YesterdayTrudeau Says Next Government Will Focus on Vaccine Mandates, Ending Pandemic
YesterdayEurozone Faces Supply Bottlenecks, Higher Inflation Amid 'Atypical' Recovery