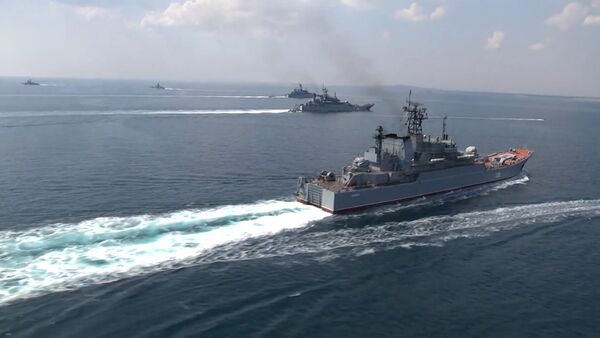 "One of the things I find very interesting with Russia’s Syria operations is that it has demonstrated the Black Sea Fleet’s expeditionary capability," Petersen said on Wednesday. "It is not something I think they could have done ten years ago, but now the Syrian intervention has been enabled by the Black Sea Fleet."

Russia has legitimate national security interests, which it has articulated, and the mission RMSI is to help US decision-makers understand those interests and what motivates them, Petersen explained.

"RMSI’s purpose is to take the best of what academic research is out there and try to help the US Navy, the Coast Guard, the joint force, the Department of Defense and other organizations make better decisions about how to handle challenges that emanate from Russia," Petersen stated.

Russian Black Sea Fleet 'Has Everything' to Destroy Enemy Moving to Crimea
"I understand this is a naval war college, but our goal is to really examine the broad scope of Russian maritime issues including Navy issues, shipbuilding, maritime law, coast guard issues, the Arctic, you name it," he added.

Russia’s Navy in recent years has made significant progress in how it uses technology and trains personnel, and that has earned it respect, Petersen said.

"But, I do think that some of their naval platforms are probably too expensive for the Russian defense budget to sustain," he asserted. "The Severodvinsk-class submarine is astronomically expensive and they are still dealing with problems with the Bulava submarine-launched ballistic missile, and it still has problems in procurement of gas turbines because of the Ukraine issue."

The RMSI is housed within the Naval War College, located in the US state of Rhode Island.