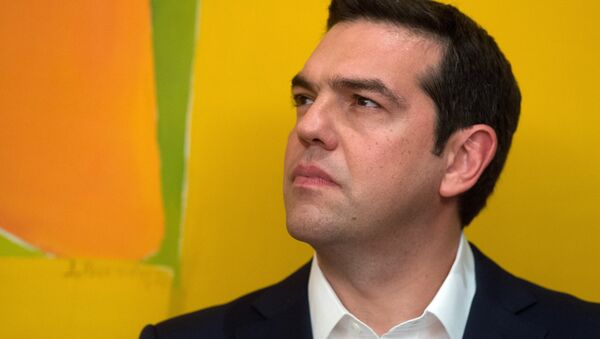 © Sputnik / Sergei Guneev
/
Go to the photo bank
Subscribe
Lawmakers in the European Parliament have accused the Greek Government of "playing with fire" and "double dealing" over its bailout terms, in a father sign of fallout between Brussels and Athens, as further warnings emerge of the country's "hopeless" state finances.

As a prerequisite of the third bailout talks beginning, Greece was forced to pass legislation on tax and pension reform, as well as other issues. The reforms included "streamlining the VAT system and broadening the tax base to increase revenue" and "up-front measures to improve long-term sustainability of the pension system as part of a comprehensive pension reform program."

The demands included passing a law scrapping Greece's generous early retirement age and raising the statutory retirement age to 67 years or 62 years with 40 years of work, from 2022 and amendments to legislation in order to collect this year's payments of the hated ENFIA property tax.

​However, The European People's Party group (EPP) in the EUn Parliament has slammed the Greek government's slowness and "double dealing" in implementing the 3rd economic adjustment program for Greece.

"The Tsipras government is playing with fire. Reforms have been only half-heartedly implemented. And Tsipras is playing a blame game. The next tranche of money from the creditors should only be released if substantial progress is made in a number of areas, including in particular the energy sector. The labor market also needs structural reforms," said Burkhard Balz MEP, EPP Group Spokesman in the European Parliament's Committee on Economic and Monetary Affairs.

Georgios Kyrtsos, Spokesman for Greek EPP MEPs in the same Committee, denounced the "double dealing" by the current government: "The bad news is that the government is not consistent and effective in pursuing the agreed policies. As a result, the social cost of government policies is going up without producing any tangible economic results. Finance Minister Euclid Tsakalotos agreed in Brussels on an ambitious privatization program, but in Athens he reassured left-wing SYRIZA supporters that as long as he remains Minister of Finance no privatization will take place. The international community should be aware of that political double dealing."

Meanwhile, the professor for economics and MEP Bernd Lucke criticized the European Commission's evaluation of the economic reforms in Greece saying a debt sustainability analysis of the International Monetary Fund (IMF) showed that Greece was virtually bankrupt. The IMF did not take part in the third bailout, which it says is "unsustainable."

"The commission is misleading the European public by pretending Greece was on its way to recovery. The IMF has clearly shown the hopelessness of Greece's situation. That is also why the IMF is refusing to take part in another aid package," said Mr. Lucke.