Privatization of Petrobras Assets 'Will Drive Up Unemployment in Brazil' 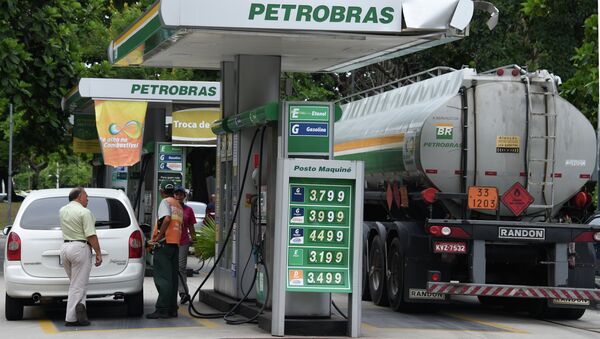 Brazil Court Approves Preliminary Probe Into Temer's Links to Petrobras Scandal
The largest fuel distribution chain in Brazil, the company operates 7,500 gas stations across the country and works with a number of industrial companies, thermal power plants and airlines.

The deal is expected to be completed in 2017 and is estimated at $6 billion. Major global players have already shown interest in buying the distributor, including France’s Total and the world’s biggest oil trader Vitol Group.

It is expected that the privatization will be fiercely opposed by labor unions, public organizations and industry workers.

Vice president of Association of Petrobras Engineers Fernando Siqueira told Sputnik Brasil that if the company is sold this will seriously worsen the situation with unemployment in Brazil.

"In Brazil, domestic-made fuel is more expensive than imported fuel. This is why other distributors buy imported fuel, but BR buys fuel from Petrobras. If the company is privatized the new owner will also use imported products. Our refineries will be left without work. And this will drive up unemployment," he said.

According to Siqueira, Petrobras CEO Pedro Parente wants to divide the country and strip the company of the monopoly to explore the Brazilian pre-salt oil reserves.

Brazil’s Petrobras Oil Output Increases After Corruption Scandal
A pre-salt layer is a geological formation on the continental shelf of Brazil. Oil and natural gas were found below an approximately 2,000-meter deep layer of salt. Drilling through the rock and salt to extract pre-salt oil and gas is believed to be very expensive.

He underscored that the development of the pre-salt layer should never be handed over to the Organization of Petroleum Exporting Countries (OPEC) since this is one of the "most corrupted companies in the world."

Petrobras is the most indebted company in the industry, with a running debt of $124 billion dollars. The debt has dragged their stock price down. Compared to other major oil and gas producers, Petrobras has only seen minor gains after a recent increase in global crude prices.

In addition, the corruption-plagued company has been affected by Brazil's deep recession.