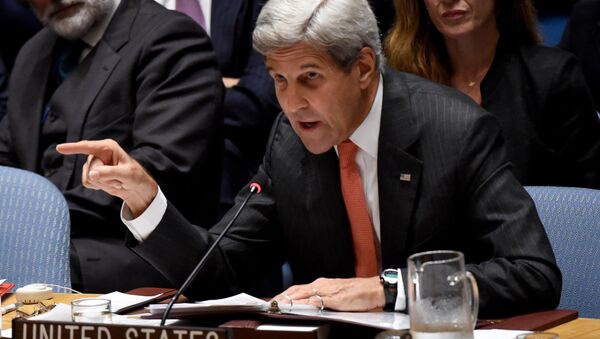 © AFP 2022 / TIMOTHY A. CLARY
Subscribe
The US government will not be able to wield as much influence in Syria by halting cooperation with Russia to resolve the conflict there, former US Ambassador Chas Freeman told Sputnik.

US Talking With ISSG Partners to Plan Next Steps in Syria - State Dept.
WASHINGTON (Sputnik) — On Monday, the United States suspended bilateral dialogue with Russia on finding a solution to the conflict in Syria after a September 9 US-Russian brokered ceasefire deal collapsed within a week.

"The US decision to suspend diplomatic dialogue with Russia about Syria is likely to reduce rather than increase US influence over the course of events in Syria," Freeman told Sputnik on Tuesday.

Russia, Freeman continued, is in touch and will work with both Turkey and Iran to maximize its impact on the various issues that drive the conflict in Syria.

By contrast, US ties with Iran are tenuous, relations with Turkey have been deteriorating, while partnerships with Saudi Arabia and other Gulf Arab states are increasingly troubled, Freeman noted.

"It does not make sense for the United States to cut off dialogue with Russia in such circumstances," Freeman suggested. "One must therefore catalog the decision to do so as driven by bureaucratic and political divisions in Washington rather than by strategy."

The Syrian peace negotiations, Freeman stated, have always been framed by the participants in unrealistic zero-sum terms that have made compromises necessary to restore a united Syria essentially impossible.

US Responsible for Failed Syria Ceasefire - Russian Defense Ministry
Freeman also suggested that the end of US-Russian cooperation will impede future deliveries of relief to the suffering people of Syria, although both sides have exploited ceasefires ostensibly secured to aid civilians.

"Both the Syrian government and the various insurgencies against it have always sought to use these [ceasefires] to their military advantage rather than as stepping stones to reconciliation," Freeman said.

Freeman decried the fact that the United States and Russia have become engaged in a proxy war in Syria amidst other proxy wars, the most notable of which is that between Iran and Saudi Arabia and their respective allies.

Both sides, Freeman claimed, view the noncombatants in Syria "as features of the battlefield to be manipulated."

Earlier on Tuesday, US Department of State spokesperson Mark Toner said in a briefing that the United States was considering military options to address the crisis in Syria.

The Russian Defense Ministry said the United States completely failed to implement all the Syrian ceasefire agreements reached on September 9 in Geneva because of Washington’s failure to separate a single so-called opposition group from the Nusra Front terrorist group.