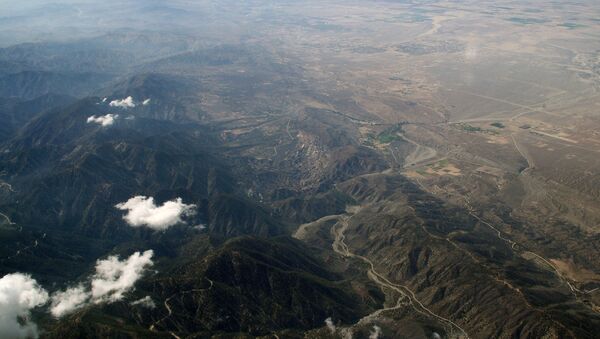 © Flickr / Doc Searls
Subscribe
California geologists released a study this week detailing their discovery of a fault near the edge of the Salton Sea that could prove potentially dangerous for millions of residents.

The study comes after a swarm of some 200 small earthquakes rocked Southern California last week, raising concern that a major earthquake may be on the horizon.

Published in the October 2016 issue of the Bulletin of the Seismological Society of America, the National Science Foundation (NSF)-funded study said that the newly found rift, called the Salton Trough Fault, runs parallel to the San Andreas fault.

The scientists wrote that the Salton Fault "represents a major geohazard to the populated areas of southern California, in particular the larger Los Angeles metropolitan area," an area already prone to earthquakes.

The San Andreas fault is 800 miles long, and forms a tectonic boundary between the Pacific Plate, moving northwest, and the North American plate, moving southeast. The Salton Sea lies 125 miles northeast of San Diego and about 160 miles southeast of Los Angeles.

The researchers, who came from the Nevada Seismological Laboratory at the University of Nevada, used LIDAR (light detection and ranging), multi-channel seismic data and ocean-bottom seismometers to map the newly-discovered fault.

Lead principal investigator Neal Driscoll remarked, "The location of the fault in the eastern Salton Sea has made imaging it difficult and there is no associated small seismic events, which is why the fault was not detected earlier…We employed the marine seismic equipment to define the deformation patterns beneath the sea that constrained the location of the fault."

The scientists believe that the Salton Trough Fault could be partly responsible for the San Andreas fault not experiencing a fissure in 300 years, even though ruptures are typically seen at the fault’s southern tip every 200 years, producing earthquakes of level 7 magnitude.

Study co-author Graham Kent said, "The extended nature of time since the most recent earthquake on the Southern San Andreas has been puzzling to the earth sciences community. Based on the deformation patterns, this new fault has accommodated some of the strain from the larger San Andreas system, so without having a record of past earthquakes from this new fault, it's really difficult to determine whether this fault interacts with the southern San Andreas Fault at depth or in time."