Putin Slams US With Geopolitical Judo 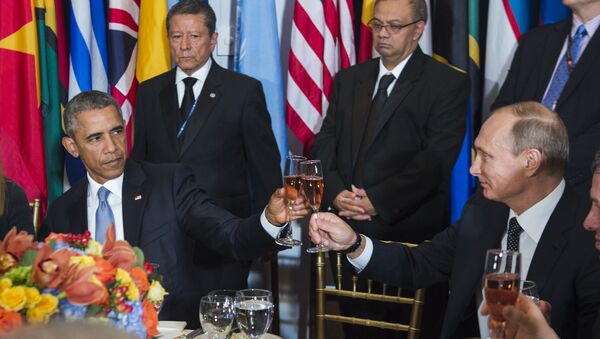 Finian Cunningham
All materials
With a swift, determined twist, Russian leader Vladimir Putin has wrong-footed his American adversary, pinning him to the ground over the Syrian crisis.

'Afghan Scenario' to Unfold in Syria as US Halts Ceasefire Talks With Russia
Writhing and flustered, the American opponent is protesting at being upended. First, in the form of a contorted media campaign smearing Russia’s military operations as somehow criminal. Second, the Americans are breathlessly claiming that Russia’s “outrageous” support for Syrian state forces is scuppering peace efforts.

Third, the Americans have tried to intimidate Russia by cutting off diplomatic contact over Syria, which is a veiled attempt to threaten Russia militarily, either from direct US intervention in Syria or indirectly by upping supply of anti-aircraft missiles to the proxy terror groups.

Russia is having none of this American menacing. It has proceeded to ramp up the military offensive along with Syrian forces to defeat the Western-backed terror groups in their last redoubt in the northern Syrian city of Aleppo. If the anti-government mercenaries are vanquished there, then the six-year foreign-fueled war for regime change in Syria is all but over.

In the diplomatic sphere, US Secretary of State John Kerry had engaged with his Russian counterpart Sergey Lavrov for months. In diplomatic jargon, the two sides referred to each other as “partners”. But in supporting opposing sides in the war and having diametric objectives, the real relationship between Washington and Moscow is clear: they are adversaries.

Russian President Vladimir Putin, an aficionado of judo martial arts, once revealed part of his pugilist philosophy learned from growing up on the mean streets of postwar St Petersburg: if a fight is looming, then don’t hesitate to strike first.

Something of this philosophy has just played out in Syria. The ceasefire plan worked out by Kerry and Lavrov was never feasible. Both Russian and its Syrian ally can be commended for giving peace a chance by initially abiding by the cessation of violence declared on September 12.

US-Backed Rebels Unleash Hundreds of Grad Missiles on Syria City of Hama (VIDEO)
But with the various foreign-backed insurgent groups continuing violence with hundreds of violations of the truce, it was evident that there was no chance of any kind of peaceful resolution. Furthermore, the much-vaunted American appeals for separation between so-called “moderate rebels” and proscribed terrorist brigades was shown to be a fallacy. The Americans, their NATO allies and regional client regimes have been all along supporting an array of illegally armed insurgents – terrorists. There is no separation.

The deadly US airstrike on a Syrian army base in Deir ez-Zor on September 17 was the final proof that the Americans were never serious about calling a ceasefire. It was always about exploiting a much-needed relief for the foreign-backed terror proxies, which Russia and Syrian forces had been hammering for the past year.

Russia and Syria are now entitled to resume their defeat of the terror brigades with even more vengeance because the failed ceasefire proved the fraudulence of Washington’s position on Syria – as not the backer of moderate rebels, but the sponsor of terrorists, the same brand of terrorists who allegedly carried out the 9/11 attacks in New York which supposedly justified the past 15 years of US foreign wars.

Last weekend, after Western media blitzing propaganda about humanitarian suffering in Aleppo, Moscow issued a pointed statement warning that if the US-led military coalition, which is illegally operating in Syria in the first place, were to attack Syrian government forces again then that would entail a “tectonic shift” for the region.

The statement from Moscow was an unmistakable warning that any further US-led military action in Syria would mean all-out war.

This is How 'Extremely Efficient' S-300 Will Boost Russia's Defenses in Syria
This line in the sand has since been followed up this week with the Russian ministry of defense disclosing that it has installed the fearsome anti-aircraft, anti-missile S-300 defense system in Syria.

Notably, too, the installation of the S-300 system came two days after Washington said that it was cutting off diplomatic talks with Russia over Syria. In other words, if Washington’s diplomatic snub was meant to intimidate Russia, then it clearly didn’t work.

The stakes are much higher than just the conflict in Syria. For at least five years since Washington jettisoned its putative “reset policy” with Moscow, the US-led NATO military alliance has been pursuing what can only be described as a policy of hostility towards Russia, a policy whose tacit logic is eventual war.

Washington wants Russia to capitulate to its global hegemony, to revert to its pathetic vassal status as was seen under the weak post-Soviet leadership of Boris Yeltsin. When Putin assumed power 16 years ago, Russia stopped being an American shoeshine boy. The country recovered its independence and national pride, as well as, crucially, its military prowess.

It is because of this independence that Washington and its European lackeys have embarked on a geopolitical strategy of undermining Russia in every conceivable way, through NATO intimidation, political and media demonization, and economic sanctions.

This week, however, it appears that Putin has finally had enough of the relentless bullying by an American tyrant that is so out of line it has found itself hopelessly wrong-footed.

Washington Taking 'Devil-May-Care Attitude' to Plutonium Deal With Russia
When Putin announced the end of the bilateral accord with Washington to dispose of nuclear-weapon-grade plutonium, he said with, correct assessment, that it was because the Americans had failed to keep their side of that bargain, and, moreover, because of the wider US hostility towards Russia on a raft of international issues, including Syria.

Significantly, Russia is demanding that if the US wants to resume the plutonium accord, then it must fulfill several conditions. They include scaling back NATO forces on Russia’s borders, ending political harassment, scrapping economic sanctions and compensating Russia for all financial losses. The BBC described Russia’s demands as an “astonishing list of conditions”.

The point is that Russia knows that it has gained the upper-hand over its American adversary. The Russian bear has patiently tolerated unremitting provocations from the arrogant Americans for years.

Even the ultimate US provocation of threatening Russia with war has failed to deter Moscow from pursuing what it knows is right: to be treated with respect as an equal.

The past year has demonstrated that Russia has the military capability to face down any American threat, including the abominable threat of nuclear war, which the Americans have repeatedly menaced through sly comments issued by its Pentagon chiefs.

It seems not a coincidence this week that Russia announced defense drills involving 40 million of its citizens. In effect, Russia appears to be saying to the US: we are not afraid of anything, we are ready to defend our nation with even better capability than you have, so don’t even think about going to war.

Washington can bluster all it wants about mulling military options in Syria, as it does in Ukraine and elsewhere. But it’s futile bluster. Because Washington knows now that Russia has slammed it with a geopolitical judo swing.

The worst thing an adversary can do is underestimate an opponent. And the arrogant, ignorant Americans have certainly done that with regard to Russia.