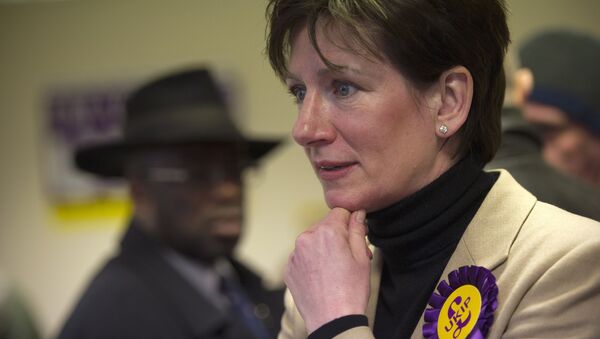 Diane James, who had been elected to replace Nigel Farage as UK Independence Party's (UKIP) leader, confirmed her resignation in a media statement 18 days after nomination.

Lawmaker Diane James Elected New Leader of UKIP
MOSCOW (Sputnik) — On September 15, James was elected the new leader of the UKIP. As many as 8,451 people out of 17,917 voted for James, almost double the amount that voted for the runner-up, Lisa Duffy.

“It is with great regret that I announce that I will not be formalizing my recent nomination to become the new Leader of the party with the Electoral Commission,” James said on Tuesday in a statement to The Times newspaper.

She also noted that she was leaving due to ‘insufficient authority’ and the lack of support from the party members.

Farage, who campaigned for Brexit, resigned on July 4 after achieving his long-awaited goal of the United Kingdom withdrawing from the European Union.