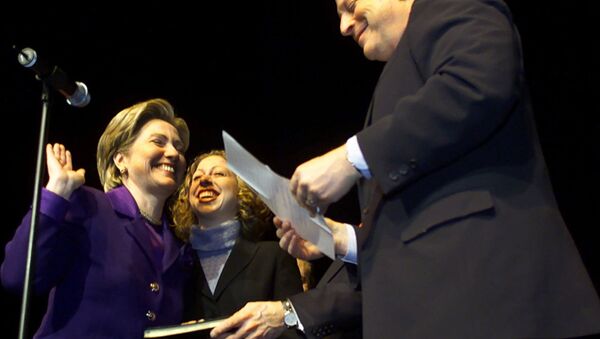 Hillary Clinton, attempting to gain the support of millennial voters who rallied so passionately behind her democratic primary-rival Bernie Sanders, has added a new weapon to her campaign’s celebrity arsenal: 68-year-old Al Gore.

The 90s are officially back.

This particular Clinton-Gore reunion seems to be an effort by Clinton’s team to capitalize on Gore’s climate authority.

The former vice president does indeed hold some sway with younger generations for his role in An Inconvenient Truth. And it is the 10-year anniversary of the film documentary about Gore’s lecture series on climate change, which won him the Nobel Prize for his efforts to spread the word about man’s impact on Earth’s climate.

Gore has been largely quiet during the campaign and passed on attending the Democratic convention, but announced in July that he would vote for the former US Secretary of State.

"I will be voting for Hillary Clinton," Gore tweeted. "Given her qualifications and experience — and given the significant challenges facing our nation and the world, including, especially, the global climate crisis, I encourage everyone else to do the same."

Clinton’s team may also be hoping that the specter of Gore will remind young voters of the 2000 campaign, which some pundits still blame on Ralph “The Spoiler” Nader. After all, with Decision 2016 offering US voters the two most disliked candidates in history, third parties have again come to the fore, and Clinton will be keen to scare voters back to the Democratic fold.

Clinton has been dogged by the “Millennial Problem” since the 2008 campaign, which she lost decisively to Barack Obama. This has not changed, and as huge numbers of millennials are thinking more seriously about third-party candidates, the Clinton campaign has been actively courting them, bringing on some of her rival’s former campaign aides to mobilize voters under 35, and reaching out to college campuses and in swing states.

Gore is boring, observers complain, and baby-boomers will likely agree. The Clinton-era centrism he represents, not to mention his massive wealth, is out of step with today’s revolution-without-the-suffering millennial mood.

Then again, Clinton does have celebrities on her team: Leonardo DiCaprio, Lady Gaga, and Pharrell, to name a few. So perhaps it isn’t the optics. (And after all, millennials have proved amenable to some old white guys.)

Maybe, in the end, it actually is the issues? Clinton’s references to climate change have fallen off noticeably since she clinched her party’s nomination over Sanders. Perhaps showing that she really believes in the cause will be the ticket. Perhaps bringing Gore and his climate advocacy to the campaign trail will be music to millennial ears.

Though when it comes to music, Bernie Sanders had Killer Mike.