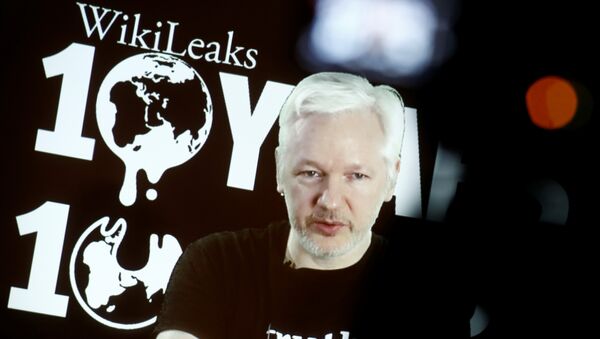 "You don't publish a few million secrets a year without making a few enemies," say WikiLeaks on it's 10th birthday, with those within the organization revealing the many threats, propaganda attacks and conspiracies they have faced over the past decade of publishing top-secret documents.

Speaking at the organization's 10 anniversary launch in Berlin, WikiLeaks employees and collaborators have revealed some of the bizarre claims directed at them as a result of their work.

"The ones that are most interesting to me are the propaganda attacks that we get, and we've been living with these for several years," WikiLeaks journalist Sarah Harrison told Sputnik and other media organizations in attendance.

Ms. ​Harrison said her first experience of these propaganda attacks came after WikiLeaks published a combined 130,000 documents relating to the actions of US armed forces in Iraq and Afghanistan, which revealed many incidents of malpractice relating to many issues, including torture.

While the revelations shocked the world, some in the US accused WikiLeaks of creating more damage by releasing the documents.

​"The first one that we were hit with when I joined was the 'blood on your hands' with the Iraq war logs, which I found just incredible, even at the time. We were literally publishing the deaths — the deaths at their hands, of tens of thousands of people — and somehow this was turned around because we explained to the world that the US were knowingly doing this."

Despite no evidence linking WikiLeaks' actions to any collateral damage in Iraq and Afghanistan, Harrison says the theories haven't stopped, adding that she is often accused of doubling as an undercover operative.

"Russian agents. I'm apparently a Russian spy [and] we don't publish anything on Russia," she said.

Nothing #Wikileaks has released has ever been debunked but ignorant people call you a conspiracy theorist if you're interested in the leaks.

While the wild theories may vary, Harrison says there is a common factor behind what she describes as "propaganda attacks."

"So for us these sorts of attacks are quite interesting. It's interesting to see the type of reaction and spin one gets. As I say, we've seen the trends, this is a reaction from an organization or an entity that we are publishing about," she said.

"We will keep publishing. It has been 10 years and 10 million documents so far, and there are a lot more coming."

WikiLeaks' anticipated publication of documents relating to the upcoming US general election has led some to even claim that WikiLeaks founder Julian Assange is personally looking to destroy US Democratic candidate Hillary Clinton's campaign.

"There has been a lot of misquoting of me and WikiLeaks publications," Assange said, responding to claims that the organization is looking to scupper Clinton's chances of being voted into the White House.

Because of media hoaxes and proven rigging of primary (Wikileaks/DNCLeaks), one simply cannot dismiss a story as a "conspiracy theory."

​"All those are false. They come about as a result, principally it seems, of Hillary Clinton's campaign… trying to personalize our publications. Are our upcoming publications significant in relation to the upcoming US election? Yeah, we think they're significant. Do they show interesting features of US power factions and how they operate? Yes, they do."

When pressed further on his alleged anti-Clinton sentiment, Assange was even asked whether he had any personal affinity with Republican candidate Donald Trump.

Let's face facts:The Julian #Assange "leak" in #Berlin this morning was just another "teaser",a near dead duck.Time for content @wikileaks!

​"I feel personal affinity, I think, with all human beings. Through understanding someone, and what drives them, you can feel sorry for them. I certainly feel sorry for Hillary Clinton and Donald Trump. It's a human sympathy — these are two people who are tormented by their ambitions in different ways."

One doesn't have to think very hard to realize that the game of whistleblowing can be very dangerous business, particularly for those leaking highly sensitive documents.

Despite a UN working group ruling earlier this year that WikiLeaks founder Julian Assange's four-year-long stint living in the Ecuadorian embassy in London amounted to "arbitrary detention," officials in Sweden and the UK rejected the findings, maintaining their position that Assange must travel to Sweden to face questioning over sexual assault allegations.

#Sputnik’s question to #Assange: What’s next re your legal situation in the Ecuadorian embassy in #London? https://t.co/yCaRr5GuSN

#Assange's answer to #Sputnik: 'It’s all politics. The law is clear. The UN has ruled on the matter' https://t.co/yCaRr5GuSN #wikileaks10 pic.twitter.com/lXcOKcCiOV

​While the UK and Sweden were criticized in the report, legal experts say there are other issues in the background.

"It was clear from the subtext of the decision that there was a larger villain lurking in the background," said Melinda Taylor, a lawyer involved in Assange's case.

She told the Berlin event that the US pursuit of Assange over WikiLeaks publishing sensitive American government documents has been behind the impasse in the sexual assault allegations brought against him by Swedish prosecutors.

​"Mr. Assange was and is a thorn in the side of US politicians, who would prefer that their dirty secrets and mistakes are hidden," she said.

"They don't see him as a publisher, they see him as an enemy combatant that must be brought to heel by any means possible."

Other high-profile whistleblowers targeted by the strong hand of the law include Chelsea Manning, the former US army soldier who was sentenced to 35 years in prison for disclosing 750,000 highly sensitive documents to WikiLeaks, and Edward Snowden, the former NSA whistleblower who is currently living in exile in Russia after releasing information about the US government's widespread surveillance practices.