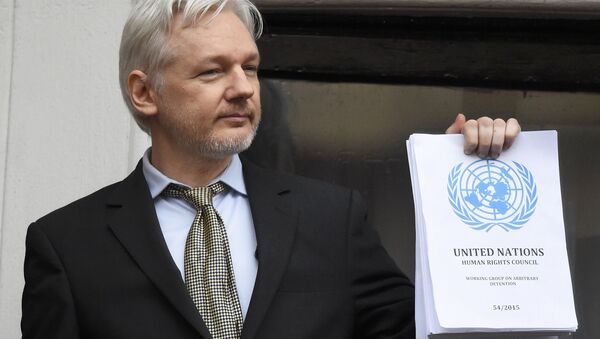 Whistleblower website WikiLeaks celebrates on Tuesday 10 years of exposing state-run cover-ups of war crimes and torture, publishing 10 million secret files at an average of 3,000 a day.

MOSCOW (Sputnik) — Years of good job earned it publicity among investigative journalists and concerned citizens, and prompted attempts from the US government to label it as a terrorist group.

Julian Assange Delivering Speech on WikiLeaks' 10th Anniversary
Additionally, many former and current high-level US officials have called for WikiLeaks founder Julian Assange, who has been living at the Ecuadorian Embassy in London, to be hunted down for what they referred to as cyberterrorism and information warfare.

Addressing a jubilee conference in Berlin, Assange said in a video linkup that governments’ reactions to leaked files were no less revealing than the secrets themselves. He added the website hoped to continue publishing every week for another decade.

In 2007, WikiLeaks revealed a batch of documents and manuals depicting standard actions taken by US authorities to hide inmates at the Guantanamo Bay prison in Cuba from the Red Cross.

Sweden Sends Ecuadorian Prosecutors Questions for Assange Interrogation
The Standard Operating Procedures (SOP), dated 2003, was described as a how-to on securing and treating 300 inmates, many of whom had been held for years without being officially charged.

WikiLeaks findings also showed how to use inmates’ psychological stress for interrogation, while PR guidelines instructed to eliminate words like "suicide" from reports or rename hunger strikes to "voluntary fasting."

In 2010, WikiLeaks released 500,000 sensitive documents on US wars in Iraq and Afghanistan, which became the largest leak of secret military logs in history.

The documents gave the first real glimpse into US military actions in Iraq starting from January 2004 and listed each attack that US forces launched in Afghanistan in 2004-2010.

The Afghan War Diary and the Iraq War Logs revealed 15,000 previously undisclosed civilian kills that US authorities had kept secret from the public.

On April 5, 2010, WikiLeaks made international headlines by publishing footage of a US Apache helicopter killing 18 civilians in the Iraqi capital of Baghdad, including a Reuters journalist and his driver.

The July 2007 video, which was shot from the chopper’s gun-sight, came with an audio track that revealed how the gunship crew laughed at the Iraqis on the ground, making remarks like "look at those dead bastards."

WikiLeaks Blasts Gray Lady for Pushing Pro-Clinton 'False Conspiracy Theories'
The US Department of Defense initially claimed the helicopter reacted to insurgent activity. After the leak, the Pentagon identified the website as a threat to US national security.

Later in 2010, WikiLeaks unlocked a trove of over 250,000 secret US diplomatic cables about every country in the world, which exposed wrongdoing on every continent.

Chelsea Manning, a US army soldier who handed over the documents to the website, was jailed by a US martial court to 35 years in a top-security jail on charges of aiding the enemy.

In early 2015, WikiLeaks started publishing draft chapters of multinational trade agreements negotiated in secret by the United States, the European Union and many South Pacific countries.

The leak on the "Three Big T’s" – the Trans-Pacific Partnership (TTP), the Transatlantic Trade and Investment Partnership (TTIP), and the Trade in Services (TiSA) – showed how negotiators sought to influence two thirds of the global economy and a population of 1.6 billion, while keeping the World Trade Organization (WTO) at bay.

In 2012 and 2013, WikiLeaks unveiled over 5 million emails documenting the "inner workings" of Stratfor, a private intelligence company that advised US government agencies and corporations.

The electronic letters, dubbed the Global Intelligence Files, disclosed a web of Stratfor’s informers and its payment laundering techniques.

Among its high-profile clients were the US Department of Homeland Security, the US Defense Intelligence Agency and the US Marines, as well as arms maker Lockheed Martin and the Dow Chemical company.

Did the NY Times Call Themselves ‘Kremlin Stooges’ in Their WikiLeaks Hit Piece?
In February 2016, the US National Security Agency (NSA) was revealed to have been spying on world leaders, including the UN chief, the German chancellor, and the last three French presidents.

The leaks showed that the online spying agency, which was caught eavesdropping on millions of US nationals in the 2013 mass surveillance scandal, had tapped Swiss phones of the UN Refugee Agency head and the WTO director of the Rules Division.

It also stole Italian diplomatic cables on Prime Minister Silvio Berlusconi’s communication with Israeli counterpart Benjamin Netanyahu and intercepted EU and Japanese trade ministers’ talks on how to stop Washington from "extorting" them at WTO negotiations in Doha, Qatar.

The most recent revelation came in July when WikiLeaks pulled the veil off the US Democratic National Committee (DNC)’s scheme to apparently undercut Hillary Clinton's rival Bernie Sanders in the race for the party nomination.

The leak of nearly 20,000 hacked emails from the accounts of DNC’s top seven figures was part of the website’s new Hillary Leaks series, which also showed how the former US secretary of state backed a 2009 coup in the Latin American nation of Honduras.