In Syria, Russia Has Done Everything It Can to De-Escalate Violence 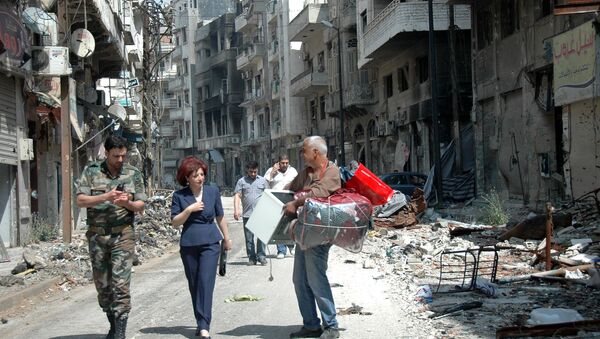 © AFP 2021 / STR
Subscribe
As Washington has officially halted all bilateral contacts with Moscow regarding Syria, a hard-won truce in the war-torn country is collapsing.

Washington Doing 'Everything to Nullify US-Russian Cooperation'
Catherine Shakdam, director of programs for the Shafaqna Institute for Middle Eastern Studies told Radio Sputnik that Russia has repeatedly attempted to bring all the warring parties in Syria to the negotiating table, including President Bashar Assad, the country’s legitimate leader. And, unlike Washington, Moscow has consistently operated within international law in Syria, and has done everything it can to de-escalate the violence.

Washington, however, has gone to great lengths to “fabricate and trade narratives” in establishing blame, without offering practical solutions.

“The US goes and starts wars without knowing what they want to see happen,” Shakdam said, referencing numerous American interventions in the Middle East and other areas. “They are always putting the powers against each other, always playing both sides of the river – because they want to make sure they’re sitting on the right side of the history. There’s no endgame, as such.”

Syria 'Refusing to Kneel Before Foreign-Backed Terrorists'
In Syria, the US “tries to sanitize the radicals, saying they’re the solution to the Assad problem,” she said. President Assad is portrayed as a “war criminal that has to go, but we haven’t been told why,” she stated, adding, “they are trying to sell terrorism as the lesser evil against the greater evil, which makes no sense.”

The academic suggested that she has found it revealing that Washington seeks to balkanize the Middle East by means of military violence, which, conversely, creates perfect conditions for interventionism. But the truth is, according to Shakdam, that the crisis has spiraled out of Washington’s control.

“The US is trying to play stability and pretend they are in control, but instability is pulling the train today,” Shakdam said. “In reality, they [Washington] don’t have a plan except driving Assad out, which will create another vacuum, just like in Iraq or Afghanistan.”

Facilitating terrorism in the Middle East creates uncontrolled chaos, which, in the long term, affects the whole world, the analyst said, referring to the ongoing migrant crisis in Europe.

“If we want peace in Syria we have to stop playing the terror card. And we should be quite real about what we call terrorism. We need to kind of stop playing militias to combat terrorism.”

'There is Agenda in US to Pursue a Confrontational Course With Russia'
In this regard, the diplomatic war between Washington and Moscow looks pointless, Shakdam asserted.

“I don’t think the US can take down Russia. It seems insane to think that they can. And they have to come to some form of understanding. It’s a great fight ongoing, and the US understands Russia has a different vision for the future.”

Cooperation is needed between nations, unlike US attempts to impose its will, she said. As regional nations like Iran or Saudi Arabia strengthen their borders, the US is missing opportunity to build cooperation, creating many enemies.

“I don’t think that they understand that the Middle East is changing and it’s not the same as yesterday,” she said. “What we are seeing is a death of the old way and the rise of the new one.”