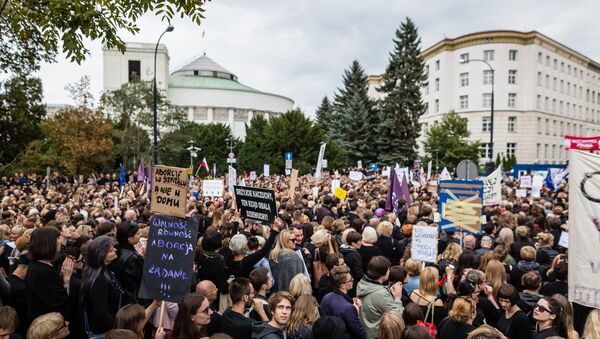 © AFP 2021 / WOJTEK RADWANSKI
Subscribe
Thousands of Poles took to the streets across Poland as part of the Black Monday strikes, protesting against new abortion laws currently proceeding through the Polish Parliament. Participant of the protest, Agatha, spoke to Sputnik Polska in an interview about the Czarny protest which stands against the ban on abortions.

Millions Mourn the Loss of Women's Rights in Poland
“It's a real record because already at 12:00 o'clock there were a lot of people and more kept coming. We marched quite chaotically through the Świętojańska Street to the building of the city administration [Urząd Miasta].”

“Then we returned to the Skwer Kościuszki and waited for 15:00, when the main march was due to take place. People kept pouring in,” Agatha said.

When the march began Agatha recalls that the, “Drivers kept honking at us, people waved from their balconies in support, so we felt that what we were doing was important.”

Most of the Poles were dressed in black and due to their march through city streets, government offices, restaurants and other businesses were closed.

"Police reported about 143 manifestations on Monday, which were attended by some 98,000 people," Jaroslaw Szymczyk said, as quoted by the Polish Wiadomosci newspaper.

The official said that the largest rally was held in the western Polish city of Wroclaw and was attended by some 20,000, while the rally in the country's capital gathered around 17,000 people.

Talking about the most popular slogans seen during the protest, Agatha said, “The most popular were, ‘My uterus, my choice.’ There were many different ones. In some the words rhymed in some they didn’t. There were funny ones like ‘PiS OFF’ or ‘PiS of Shit’ [in reference to the name of the ruling Prawo I Sprawiedliwość – PiS party].”

Agatha spoke about the reaction of the Polish government or media to the protests, saying that there was something about it in the media as there were many cameras, photographers etc. covering the protest. However, the response from the government was “mediocre.”

“We stood in front of the city’s administration building but the mayor did not come out to us. It was kind of sad,” Agatha said.

Regarding protests held in the neighboring towns of Sopot and Gdansk, Agatha said that over there girls had been out in the streets since 9 a.m.

​However, looking at the town of Gdynia, Agatha said the march was really successful because no one expected that such a number of people would show up.

“There were mothers with young children in strollers, mothers in law, grandmothers, and aunts. You can say it was a family atmosphere. I even met my uncle, so we protested together. We are happy because we have come here for a common goal, to fight for our choice,” Agatha concluded.

The ruling Law and Justice [Prawo I Sprawiedliwość – PiS] party has put forward the proposal — from a group called Ordo Iuris — for debate in parliament. Critics of the new rules say PiS may back them for fear of angering the church in steadfastly Roman Catholic Poland.

Poland's already restrictive laws only allow abortion in the case of rape, incest, a threat to a pregnant woman's health, or when the baby is probably going to be permanently handicapped.

Women and doctors could face jail if convicted of causing what the proposed rules call “death of a conceived child,” and critics say doctors would be discouraged from doing prenatal testing, particularly if that carried the risk of miscarriage.

Protests against putting a ban on abortion took place in London, Edinburgh, Brussels and Berlin to name just a few; with some estimates suggesting that up to six million women could be taking part within Poland.

The bill which would bring about the change in law is currently at the Committee stage in the Polish Parliament, no government officials have yet commented on whether it will be revised.

000000
Popular comments
This is fundamentally an attack against christianity as are all minority rights and issues in the west. If you want to know who rules over you (and instigate these attacks) ask yourself who you cannot criticise (Voltaire)
deshepherdishere
4 October 2016, 15:11 GMT
000000
On the one hand, you cannot have a completely deregulated system of abortion where the law has nothing to do; would you really want Dr. Nick from the Simpsons causing that kind of harm, with no restrictions on who, where, when or how? But on the other hand, this law seems to me to be MERELY THE OPPOSITE of that kind of situation. And that's worrying. Merely the opposite of something bad? When has that ever been the right response? Nobody knows what the laws on abortion ought to be. But I guess the least bad policy has to lie in that same vast area of uncertainty between absolute prohibition and absolute deregulation. Does one simply have to choose between one of two extreme positions? Is this the only option left? I have heard that even among Orthodox Jews, a very traditional religious group, there are some who accept abortion in certain extreme circumstances. Isn't it problematic to take an absolutist position, in either direction? Worrying times.