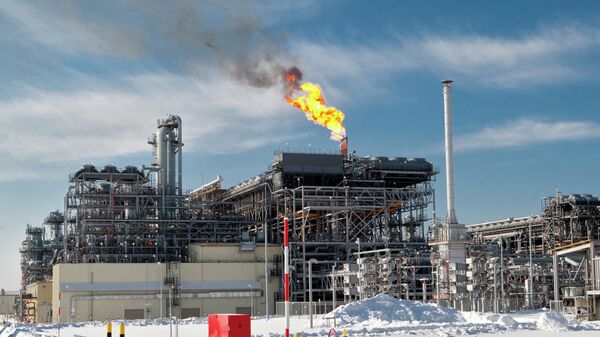 Gazprom Discusses Expansion of Sakhalin-2 LNG Project With Japan's Mitsui
ST. PETERSBURG (Sputnik) — "The sides discussed a wide range of issued on developing their strategic partnership in the energy sector. In particular, attention was given to the project on building a third production line at the LNG plant on the Sakhalin island. It is noteworthy that the preparation of FEED [front-end engineering and design] documentation is in its final stage," Gazprom said in a statement.

The meeting, which was held on the sidelines of the St. Petersburg International Gas Forum between Gazprom CEO Alexei Miller and Shell Chief Executive Officer Ben van Beurden, also dealt with the Nord Stream 2 gas pipeline project, which both companies are partners in, as well as discussing possible new joint projects under the 2015 strategic cooperation agreement.

The Sakhalin II project is the first and currently the only LNG plant in Russia. Sakhalin Energy is the operator of the project. Gazprom owns 50 percent plus one of Sakhalin II shares, while Shell owns 27.5 percent minus one share. Japan's Mitsui and Mitsubishi own 12.5 percent and 10 percent of the shares respectively.

Gazprom and Shell signed the agreement to build the Sakhalin II third production line in 2015 alongside a strategic cooperation agreement.