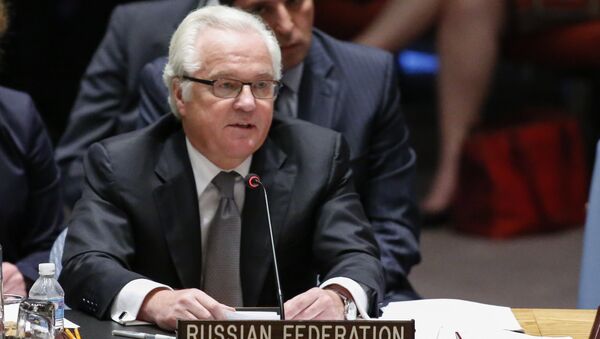 On Monday, the US State Department announced plans to halt all contact with Russia on Syria, citing the collapse of the ceasefire agreement.

The Russian Foreign Ministry accused the US of attempting to "shift the responsibility on somebody else."

Moscow: US Failed in Its Syria Commitments, Tries to Shift Blame on Russia

"I do not think that an alternative exists," Churkin said earlier on Monday, referring to claims from the White House that it was seeking an alternative to the Syrian conflict. "What they declared is extremely regrettable."

Churkin stressed to journalists that any UN Security Council resolution on Syria must go beyond a ceasefire agreement and include concerted action against terror groups.

Churkin explained that terror groups are spoilers who will violate any ceasefire agreement.

When asked whether Russia would ground aircraft over Syria as part of a ceasefire agreement, Churkin told reporters, “We cannot accept unilateral steps.”

Moscow has been watching the Nusra Front launching an offensive near the Syrian city of Aleppo, and efforts must be made to stop it from spreading, Churkin stressed.

"In the process of the past few weeks, after September 9 arrangements were reached, we have seen numerous violations by Nusra and others cooperating with Nusra of the cessation of hostilities regime. We have seen them launching a major offensive, I think, south of Aleppo where they were threatening to encircle around 1,5 million people in that area," he said.

The envoy continued, “We see an extremely dramatic situation. We must make sure that Nusra influence is not going to continue to spread.”

While here are no immediate prospects for renewed UN Security Council talks on the situation in Syria, Churkin noted, it is not impossible that Washington and Moscow’s UN envoys could have discussions.

"I wouldn’t rule it out… I would love to try, but we need to have some realistic reason to believe we might come to some mutual understanding," he stated. "If there is a possibility, we will definitely try very hard."