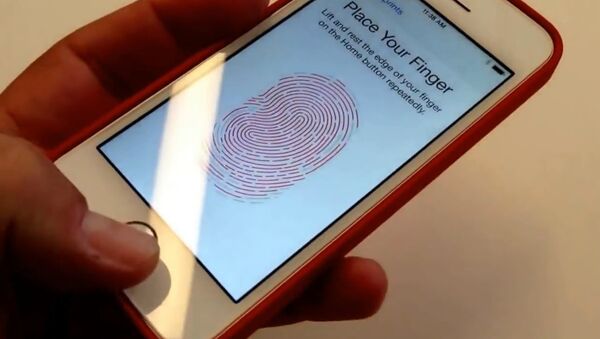 © Photo : Youtube/CNET
Subscribe
Computer scientists and electrical engineers at the University of Washington have discovered a method to use fingerprint sensors to transfer passwords through the human body in order to avoid hacking.

No More Fingers! 'Brainprints' to Be the Passwords of the Future
The method involves using benign, low-frequency transmissions produced by fingerprint sensors and touchpads on consumer devices.

“Fingerprint sensors have so far been used as an input device. We have shown for the first time that fingerprint sensors can be re-purposed to send out information that is confined to the body,” online Science journal, Digit, reported Shyam Gollakota, Assistant Professor at University of Washington (UW) as saying.

One of the biggest issues with wireless communication is the possibility of a security breach as the medium of data exchange is through the air. On the other hand, this newly discovered method uses the human body and can limit any potential hacking.

According to the scientists, method works in different positions such as standing, sitting and sleeping.

“Let’s say I want to open a door using an electronic smart lock,” said co-lead author Mehrdad Hessar, a UW electrical engineering doctoral student. “I can touch the doorknob and touch the fingerprint sensor on my phone and transmit my secret credentials through my body to open the door, without leaking that personal information over the air.”

This technology may also come in handy to secure key transmissions to medical devices such as glucose monitors or insulin pumps, which look for confirmation of someone’s identity before sending or sharing the data.

The research was funded by the Intel Science and Technology Center for Pervasive Computing, a Google faculty award and the National Science Foundation.

000000
Popular comments
the article is not that clear about the process. Time to chase up the announcement directly.
michael
4 October 2016, 02:12 GMT
000000
Seems like biometric profiling to me. The establishment wants a biometric profile on everyone and they'll tell any BS to get it. I was looking at Bitcoin ATMs in the US. It's unbelievable what they want, scanned government ID, palm scan and face scan.
jas
4 October 2016, 02:22 GMT
000000
Newsfeed
0
New firstOld first
loader
LIVE
Заголовок открываемого материала
Access to the chat has been blocked for violating the rules . You will be able to participate again through:∞. If you do not agree with the blocking, please use the feedback form
The discussion is closed. You can participate in the discussion within 24 hours after the publication of the article.
To participate in the discussion
log in or register
loader
Chats
Заголовок открываемого материала
Worldwide
InternationalEnglishEnglishMundoEspañolSpanish
Europe
DeutschlandDeutschGermanFranceFrançaisFrenchΕλλάδαΕλληνικάGreekItaliaItalianoItalianČeská republikaČeštinaCzechPolskaPolskiPolishСрбиjаСрпскиSerbianLatvijaLatviešuLatvianLietuvaLietuviųLithuanianMoldovaMoldoveneascăMoldavianБеларусьБеларускiBelarusian
Transcaucasia
ԱրմենիաՀայերենArmenianАҧсныАҧсышәалаAbkhazХуссар ИрыстонИронауОssetianსაქართველოქართულიGeorgianAzərbaycanАzərbaycancaAzerbaijani
Middle East
Sputnik عربيArabicArabicTürkiyeTürkçeTurkishSputnik ایرانPersianPersianSputnik افغانستانDariDari
Central Asia
ҚазақстанҚазақ тіліKazakhКыргызстанКыргызчаKyrgyzOʻzbekistonЎзбекчаUzbekТоҷикистонТоҷикӣTajik
East & Southeast Asia
Việt NamTiếng ViệtVietnamese日本日本語Japanese俄罗斯卫星通讯社中文（简体）Chinese (simplified)俄罗斯卫星通讯社中文（繁体）Chinese (traditional)
South America
BrasilPortuguêsPortuguese
NewsfeedBreaking
15:25 GMTTaliban Plans to Form Commission in 2022 to Draft New Constitution
15:22 GMTWatch Fuego Volcano Erupt in Guatemala, Spewing Out Vast Amounts of Smoke and Lava
15:17 GMTRussian Officials Assess Proposal to Populate Siberia With 'Resurrected' Woolly Mammoths
15:13 GMTParis to Bill Canberra for Cancellation of Submarine Deal After AUKUS Pact
14:51 GMT'Britney VS Spears': Pop Star's Fiancé Accuses Docu Makers of Earning Profit From Her Story
14:41 GMTRussian Union of Journalists Chief Slams 'Unacceptable' US Sanctions Against Colleagues
14:31 GMTUS Investment Firm Purchases Italy's Oldest Football Team
14:29 GMTUS to Find Ways to Get More Help to Haitian Migrants After US Envoy Resigned, State Dept. Says
14:25 GMTAnthony Joshua Says He Would ‘Fight King Kong' if He Had to as He Defends Titles Against Usyk
14:18 GMTFormer Nazi Helmut Oberlander Dies in Canada Before He Could Be Deported, Reports Say
14:07 GMTWhat's Behind Africa's Increasing Drive to Launch Satellites?
14:06 GMTExpo 2020 in Dubai Set to Boost Economic Development in Arab World, Organiser Says
13:58 GMTTwo Afghan Evacuees Charged With Sexual, Physical Assault in US, Justice Department Says
13:51 GMTBritish Government Preparing for 'Worst-Case Scenario' of Gas Prices, Says MP
13:43 GMTOutrage as Missouri High School Students Reportedly Come Up With Petition to Reinstate Slavery
13:42 GMTEC Does Not Expect Increase in Smartphone Prices Over Universal Charging Port Regulation
13:26 GMTAmericans Favour Trump Over Biden After Afghanistan Pullout Disaster, Poll Says
13:25 GMTComputer Game to Measure Children's Mental Development Launched by MSUPE
13:21 GMTDay 3 of 76th Session of UN General Assembly
13:18 GMTRoscosmos Starts Preparations for Landing First Russian Cosmonaut on Moon