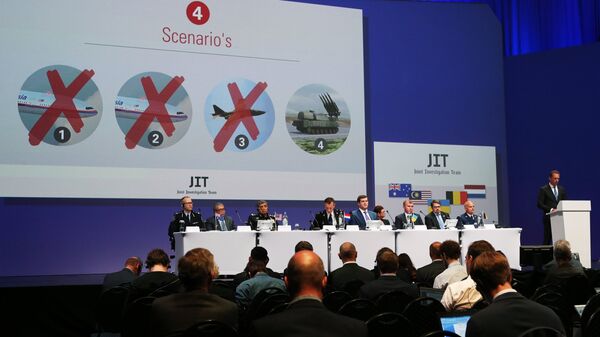 The report claimed that that the Malaysia Airlines MH17 plane was allegedly downed by a 9М38 missile launched from a Buk system, which was brought from Russia and later returned there.

Flight MH17 crashed with 298 people on board on July 17, 2014 in eastern Ukraine, while en route to Kuala Lumpur from Amsterdam, leaving no survivors. The plane crashed near the settlement of Pervomayskoe, which was controlled by Donbass militias at the time.

"The key conclusion of the Dutch-led criminal inquiry implicating Russia in the 2014 shootdown of Malaysia Airlines Flight 17 relied heavily on cryptic telephone intercepts that were supplied by the Ukrainian intelligence service and were given incriminating meaning not clearly supported by the words," Parry said.

He also cited the JIT clearly ignoring other intercepted communications that were out of sync with their conclusions, including a conversation that "appeared to be referring to a Ukrainian convoy that was closing in on the Lugansk airport, placing Ukrainian troops deep inside rebel territory."

The Ukrainian forces penetrating that deep into rebel territory means that "a Ukrainian Buk battery might have traveled along the southerly route H-21, which skirts Donetsk and then heads east toward the JIT's claimed firing site in a field near the town of Pervomaisky," according to Parry.

World
MH17 Crash: Dutch Investigators Turn Blind Eye to Russian Data
According to him, as evidence that the Buk missile system was brought into Ukraine from Russia, the JIT cites "one phone intercept, which – according to the JIT's translation – does not use the word Buk though referencing a piece of equipment that can move on its own or be transported by truck."

"That could be a Buk system but could apply to many other weapons systems as well," he said.

Additionally, Parry referred to last October's finding released by the Dutch intelligence service which claimed that the only missile system in eastern Ukraine at the time capable of shooting down the MH-17 plane at 33,000 feet (11 kilometers) belonged to the Ukrainian military, not the Donbass militias.

"Another key point, the disputed location of the so-called 'getaway' video of a Buk missile system missing one missile, is simply asserted as fact without an explanation as to how the JIT reached its conclusion placing the location near Lugansk," Parry said.

He also drew attention to the fact that although Western media trust the JIT, the investigators themselves admitted a dependency on the Security Service of Ukraine (SBU), which he said "shaped the inquiry by supplying its selection of phone intercepts."

Meanwhile, Mikhail Malyshevsky, an adviser to the chief designer of the Russian arms manufacturer Almaz-Antey, said in an interview with Sputnik that for unknown reasons the Dutch investigators did not take into account the real technical characteristics of the Buk missile, which were deliberately declassified by the Russian side.

"For some reasons the JIT refused to deal with information granted by Almaz-Antey and preferred to use [mistaken] data from American textbooks [as far as the Buk missile is concerned]," he said, adding that all types of Buk missiles are equipped with detonators installed in the front, not rear, part of the missile, which "automatically changes the characteristics."

According to Malyshevsky, a meticulous study of the technical details of the disaster casts doubts on the results of the JIT's investigation into the MH17 crash.

In particular, the nature of the plane's damage indicates that the real position of the angle at which the missile reached the aircraft differs from the one noted by JIT experts.

Never had an opinion on #MH17, but what I never understood is how a country on the suspect list was part of the official investigation team.

It means in turn that the missile was launched from an entirely different point, namely from the area near the village of Zaroshchenskoye, which was controlled by Ukrainian armed forces at the time.

"After numerous tests and simulations, we have fully confirmed our suggestion that the most probable point for launching the missile was the area south of the village of Zaroshchenskoye," Malyshevsky said.

World
A Second Look at the MH17 Tragedy: 'If You Want Objectivity, You Can Get It'
He was echoed by RIA Novosti political analyst Vladimir Ardayev, who quoted Almaz-Antey experts as saying that the MH17 plane could have been shot down by a 9M38 missile launched from a Buk system. These missiles haven't been produced or used in Russia for a long time, but remain in service in Ukraine.

Meanwhile, Kremlin spokesman Dmitry Peskov has said that an investigation into the Malaysian Airlines MH17 crash is "doomed to fail" if all the versions of the disaster are not taken into account.