Life Going Back to Normal in Syria’s Palmyra Liberated From Daesh Terrorists
In an interview with Sputnik, Iranian political analyst Ghodrat Ahmadiyan praised efforts by Russia, Iran, and the Syrian government to create a political balance, which he said will ultimately add to the destruction of Daesh (ISIL/ISIS) terrorists.

The interview came amid preparations by the Iraqi army and Kurdish Peshmerga forces for a large-scale military operation to drive the terrorist group out of Mosul, the largest city in northern Iraq. 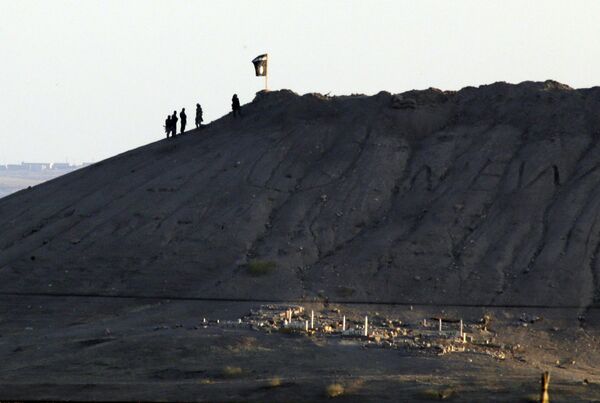 In this file photo Daesh terrorists are seen after placing their group's flag on a hilltop at the eastern side of the town of Kobani, Syria
© AP Photo / Lefteris Pitarakis

Ahmadiyan said that information about the Iraqi army's readiness to attack Mosul indicates Daesh's diminishing clout in the region.

"Daesh is retreating, and Moscow, Tehran and the government troops in Syria are doing everything they can to support a political balance that will ultimately allow them to root out Daesh terrorists," he said.

At the same time, Ahmadiyan warned that eradicating terrorism in Syria and Iraq can only be achieved through full-fledged political interaction and fruitful public dialogue.

According to him, terrorists continue to benefit from inconsistency and the lack of a unified position among members of the Western coalition.

"Searching for a political balance in the fight against Daesh should now become a priority. Only the balancing of interests and the unity of forces in anti-terrorist actions can lead to final success," he pointed out.

Ahmadiyan said that Daesh still remains a tool for ensuring the interests of individual countries, and that Daesh terrorists are still used to undermine the unity not only within the anti-terrorist coalition, but also inside Syria itself.

He underscored the importance of clarity of the position and transparency of the interests of all players involved in the process.

"Otherwise, it will be impossible to get rid of terrorism from a strategic point of view. Yes, Daesh can be destroyed physically in the foreseeable future. But if there is no political consensus, a terrorist mold will inevitably appear again on Syrian and Iraqi soil in the future," he concluded.

Meanwhile, Said Mamuzini, who represents the Kurdistan Democratic Party in Mosul, said in an interview with Sputnik that a military operation to liberate the city is due to start "in the first week of October."

According to him, apart from the Iraqi army, taking part in the operation will be Peshmerga forces which have already liberated several major Kurdish settlements from jihadists and are now approaching Mosul's borders.

Earlier, Turkish President Recep Tayyip Erdogan said that a joint campaign between the Iraqi army and Kurdish Peshmerga forces to liberate Mosul could begin on October 19.

Weak Girls, Huh? Veiled Women Become Daesh's Worst Nightmare
Mosul is Iraq's second-largest city and capital of the northwestern province of Nineveh. It has been occupied by Daesh terrorists for over two years and declared the Iraqi capital of the so-called Daesh caliphate.

With a government-estimated pre-invasion population of 1.5 million people, according to the Wall Street Journal, Mosul was the second most populous city in Iraq and the biggest city to fall to Daesh forces.

Once home to one of the country's most diverse urban populations, including one of the world's oldest Christian communities, Mosul fell to the terrorists in June 2014, forcing hundreds of thousands to flee for their lives or face murder, enslavement and rape.