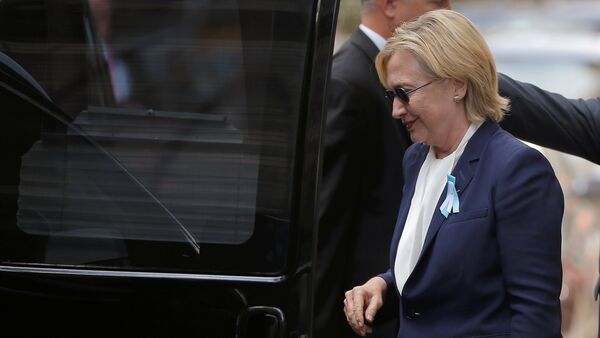 Hillary Clinton once again struggles to combat her most fierce rival this election season… stairs.

Rumors about the Democratic nominee’s failing health reemerged on Friday after Hillary Clinton once again struggled to do something that all too many Americans take for granted – walk down a four stairs without falling over – leading some to wonder whether she is suffering a neurological condition.

Congress Throws Obama Under Saudi Bus: How Riyadh Will Respond to the 9/11 Bill

The latest video comes only weeks after the former Secretary of State seized slightly before collapsing in front of a black SUV at the 9/11 Memorial ceremony with staffers and Secret Service catching her before she slammed to the pavement. The incident led vaunted journalist Tom Brokaw to say Hillary “should go to a hospital and see a neurologist.”

Instead, Hillary was rushed off to her daughter Chelsea’s apartment and did not see a medical professional until hours later when she returned to the family home in Chappaqua, New York. The Clinton campaign initially said the Democrat left the event due to dehydration, but quickly changed their story after video footage had emerged of Hillary’s collapse saying instead it was "pneumonia."

In a strange series of days to follow the Clinton team claimed that she had caught a contagious strain that had passed throughout the office before her doctor suggested her pneumonia was non-contagious which of course contradicted Bill Clinton’s varied statements that Hillary has episodes where she collapses "frequently" versus his attempt to downplay the incident calling it the "flu."

Speaking in Florida on Friday, it seems that the mystery of Hillary’s health continues as she cut her speech short at about 25 minutes after coughing and reaching for a lozenge as she began to lose her voice before struggling mightily to walk off the stage.

After walking to the top of the stairs, Clinton waved over a Secret Service staff member to help her to walk down the stairs burnishing yet another image in the eyes of the American people of the former top diplomat holding onto an arm for dear life while staring down at the ground and very slowly mastering the art of walking down stairs as if for the first time.

The concerns about Clinton’s health were largely considered to be in the realm of conspiracy theories earlier in the election season until video emerged of Clinton having a thirty second seizure in front of a row of supporters and the subsequent collapse at the 9/11 Memorial ceremony.

As Secretary of State, Hillary suffered a concussion after fainting in 2012 along with a blood clot in her brain as a complication that she admits led her to not remember the briefings on maintaining classified information provided to her in the last months of her service as America’s top diplomat.