Armageddon: Will It Come on Obama’s or Clinton’s Watch? 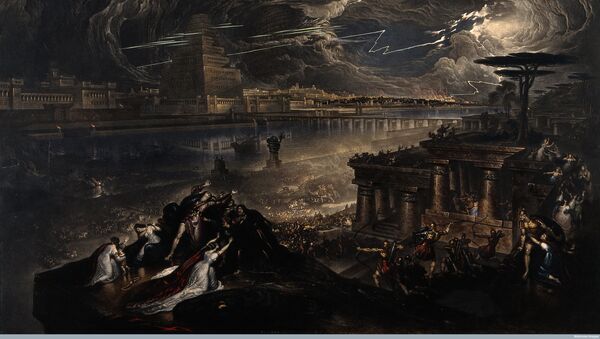 Direct Aggression by US in Syria to Lead to 'Tectonic Shifts' in Middle East
The battle of Armageddon refers to the final war between human governments and God. In the book of Revelations, in Christian scriptures, this ultimate battle of good and evil takes place on a plain beneath the Israeli town of Megiddo. Most scholars agree the reference to the town is figurative only, but Tel Megiddo is just over 80 miles from embattled Damascus, Syria. I know this is an interesting revelation for some, but geographic proximity to end days is not the only “coincidental” moment of our time.

There’s a song from the 1960s that comes to mind. The melody and lyrics of the Zager and Evans super hit tune “In the Year 2525” are droning in my brain this morning, one stanza in particular:

“In the year 7510 If God's a-comin' he ought to make it by then Maybe he'll look around himself and say Guess it's time for the Judgement day.”

Losing in Syria, US Resorts to Threatening Russian Cities With Terror Attacks
After you read this article, I am sure some of you will agree that God may be arriving a bit ahead of schedule. For Russians, the Chinese, and folks in Iran and millions of others worldwide, US President Barack Obama’s State Department’s “Russian body bags of terror” announcement to the world, is cause for fearsome contemplation. Russian Foreign Ministry spokesperson Maria Zakharova asked on her Facebook page:

"Don't you think that such ventriloquism about ‘body bags,' ‘terrorist attacks in Russian cities' and ‘loss of aircraft' sounds more like a ‘get 'em' command, rather than a diplomatic comment?"

The Battle of Megiddo of 1918, Great Britain’s crushing defeat of the Ottoman Turks, Lawrence of Arabia’s part, the latter taking of Damascus, all that drama is lost in current day propaganda and the business of détente. But the echoes of Armageddon grow louder now.

The march to Damascus, the Pursuit to Aleppo, and the crushing effects in the aftermath are still with us. The Turks are still there, the Arab tribesmen, the Brits and the Europeans, and new American adventurers are at play. What, you thought rumors Turkish President Recep Erdoğan is after a new Ottoman Empire were conjecture? That, as they say, is another story.

Post-Brexit Europe: 'End of Brussels-Centric, Deeply Integrated Shangri-La'
With biblical catastrophe in mind, anyone focused on European politics should pay keen attention to the refugee crisis, the banking situation, and the underlying potential for revisiting the holocaust. Yes, I said it; the holocaust had its roots in racial and religious divide, and especially in socio-economic frictions. In the lead up to World War II Germans carried their payday home in wheelbarrows the Mark was so worthless.

News hedge funds are pulling money out of Deutsche Bank, arguably the “brokest” bank in Europe, sets the stage for a worthless euro. Europe’s “brokenness” is further compounded by the burden of millions of refugees, and failing austerity and other economic endeavors. With the United States “leaning” on NATO allies to prop up Ukraine, and to reinvest in an arms buildup aimed at Russia, many European nations are now balking. All it will take is one more shortfall and the EU could splinter along nationalistic lines we’ve witnessed before.

Too Little, Too Late? Merkel Admits Mistakes in Refugee Policy
Furthermore, when Chancellor Merkel’s party MP came under fire for using a Nazi propaganda term in a speech, an undercurrent that exists here in Germany was uncovered, though few fully recognized. German Bundestag representative Bettina Kudla Tweeted “The Umvolkung of Germany has already begun. There is a need for action!” – the duality of the German populace reappeared. For those unfamiliar, Umvolkung was used by Nazis to mean “ethnic transformation”, and from my discussions in the villages surrounding our offices, ethnic and cultural upheaval is the loathsome subdued fear. I do not mention this lightly either, I assure you.

We’ve lived her in Germany’s oldest city of Trier for almost a decade, and there is a duality of appearances in the country. By duality I mean, there is the side of opinion Germans show Ausländers (foreigners), and the side they reveal to neighbors and trusted friends. My “conversations” have been informative, to say the least, and of late the tone toward Chancellor Merkel and the refugees has gone full dark. N

ot only are Germans scared and worried about the scope of Frau Merkel’s refugee policies, even the most moderate among my constituents exhibit real animosity now. Where a kind of cool detachment is generally shown outwardly, beneath the calm a tempest is brewing. And the tempest is not a totally anti-Muslim trend, but anti-American is the way of the sentiment now. I leave the reader to conjure his or her own neo-fascist nightmare for now.

Russian Military Intervention Saved Syria From Becoming a 'Daesh Caliphate'
Vladimir Putin’s scolding of the US coalition via YouTube, when Russian air forces hammered on video those ISIL (Daesh in Arabic) tanker trucks, it was a revelation many of us thought would bring an end to the Obama shell game of protecting ISIL and other anti-Assad elements. I originally termed Central Command’s ludicrous air campaigning as “flying air cover for jihadists”. How could I have known how right I was? Who among my countrymen would have ever guessed; "One nation under God" recited as children in school, might ever end up anything like;"Babylon the Great, the Mother of Prostitutes and Abominations of the Earth"?

Today, the United States is in an even more provocative and desperate war, one where invisible special forces and spook advisers assist anybody that will fight the real Syrian Army. The US, Qatar, NATO, Israel, Saudi Arabia, Jordan, UAE, and fundamentalists including the rebel FSA, Ahrar al-Sham, Al-Nusra — Al-Qaeda in Syria, and the Turkmen are arrayed on one side, while the Syrian army or Assad, the NDF, Russia, Iran, Hezbollah, Shiite groups from Iraq, sit on the other.

US Won't Drop Its 'Cooperation Game' With Syrian Kurds Despite Turkey's Protests
Splattered all over the map of Syria are the Kurds and the ever more nebulous Daesh forces. Meanwhile, China’s tacit policy of non-intervention support for Assad teeters on the pinpoint of US machinations in the South China Sea and elsewhere. Joint naval drills from Russia and China of late, would tend to draw the line the west least needs to see. Returning to Armageddon, I mean Syria…

30 miles from the Syrian Golan Heights, which Israel now occupies, Tel Megiddo is now a national park. As I type this article, the mightiest forces on our planet are arrayed, essentially surrounding this focal point from ancient and modern history. For those interested, Megiddo's 5,000-year-old "Great Temple", which dated to the Early Bronze Age I (3500–3100 BCE), has been described as “among the largest structures of its time in the Near East”.

At the apex of the point where the world’s major religions converge, the so-called Levant (Syria-Palestine and the wide eastern Mediterranean) is not part of the Daesh identity by chance. Breaking this all down, history, tradition, religion, politics and geography all coincide very uncomfortably within international relations today. Obama withdrew from Afghanistan leaving the same mess America swore to fix. Iraq is a mess too. Libya and other Arab Spring overthrows destroyed any sense of stability in the greater region. And now American diplomats threaten to kill Russians? Right out in the open?

History Repeating: 'Libyan Scenario' Taking Shape in Syria
As an independent analyst and writer, not one of my colleagues in alternative media has any doubt any more. There is a nasty gash in civility and the polis, a wound opening along cultural, racial, religious nationalistic, economic, and geographic lines. The astute and truthful out there can see it, acknowledge it, and call attention to it, while those involved in tearing it further hide it.

In America God is out of sight, the bible or any religious texts are being made into comic books. A kid cannot even put his hand over his heart and pledge allegiance any more. In Europe atheism and agnosticism have supplanted just about every strict belief. In the western world, increasingly, being Muslim means being suspect or worse. And Russians are automatically hell bent on reclaiming a long lost Soviet Empire!

And somebody is going to accuse me of being a bible conspiracy theorist when they read this! We’ll see, is the best I can say. The only puzzle left for me is whether or not Obama or Clinton will meet the wrath of God as president. Mr. Trump will surely shoot off his own foot before getting a shot at being the Anti-Christ.

000000
Popular comments
Self-fulfilling prophecies, at best, nothing else. Oh, and it is "Book of Revelation" (singular) and not "Revelations" (plural).

Vera Narishkin
3 October 2016, 23:34 GMT
000000
A self-fulfilling prophecy is when a person (or, in the present case, a vast number of people) unknowingly causes a prediction to come true, due to the simple fact that he or he expects it to come true. In other words, an expectation about a subject, such as a person or event, can affect our behavior towards that subject, which causes the expectation to be realized.