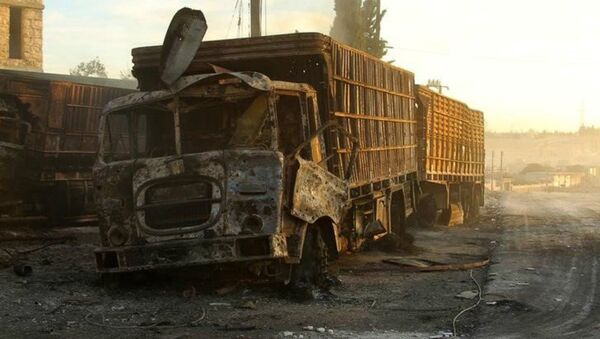 German lawmaker Alexander Neu said that with no political settlement in sight, Syria runs a considerable risk of collapse of its statehood.

Russia Came to Rescue Just as Syria Was 'Close to Falling in the Arms of Daesh'
MOSCOW (Sputnik) — The Russian campaign in Syria has weakened Islamic State (ISIL or Daesh), but the West’s continued support of "moderate" rebels can reverse stabilization processes underway in the country, German lawmaker Alexander Neu told Sputnik on Friday.

"Islamic State was weakened, but not irreversibly… Hence, [whether] Russia’s intervention has prevented Syria from becoming Iraq or Libya is not yet decided. The West and Turkey’s interest in supporting the insurgents and terrorists still exists," Neu, a member of a parliamentary defense committee said.

With no political settlement in sight, Syria runs a considerable risk of collapse of its statehood, Neu, of the far-left Die Linke party, said.

One year into the Russian offensive, Daesh militants have lost a lot of the ground and financial assets in Syria after Russia conducted surgical airstrikes against its oil infrastructure, convoys and arms supply routes.

Russian Aerial Campaign Spurred US Anti-Terror Efforts in Syria, Iraq
At the same time, the Pentagon has continued its train-and-equip effort for Syrian opposition forces despite failing to separate rebel troops in the country’s north from Daesh and the Nusra Front, now known as Jabhat Fateh al Sham, both outlawed in Russia.

After the 2003 US invasion toppled Iraqi leader Saddam Hussein, the country has been engulfed in ongoing violence. Large swathes of Iraq are currently controlled by the Daesh jihadist group, outlawed in Russia.