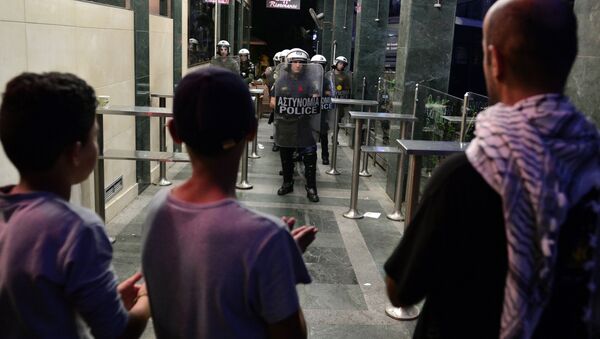 At Least 30 Injured in Fire at Greece’s Lesbos Migrant Camp – UN Refugee Agency
MOSCOW (Sputnik) – On September 27, five boys aged between 12 and 16 were detained, while they carried plastic toy guns in the Greek capital of Athens. During the detention, police had reportedly ill-treated children because allegedly they were members of "an armed group."

"The alleged ill-treatment of five Syrian refugee children who say they were detained, beaten and forced to strip naked by Greek police for carrying plastic toy guns in the street is a deeply disturbing incident that must be properly investigated," Amnesty International said.

According to the watchdog, during the detention one child was reportedly thrown against a wall and the other one was slapped on the back his neck, all the boys were not allowed to contact their family.

The human rights group added citing police sources that Greek authorities had already started "a disciplinary inquiry" to confirm or to confute the allegations.

Europe is suffering from a massive migration crisis, trying to find a way to tackle the flow of undocumented migrants. Greece is on the frontline of the refugee crisis, as hundreds of thousands of people arrive in the Balkan state crossing the Mediterranean in order to seek asylum in the European Union.

000000
Popular comments
Whats with constantly giving voice to Soros funded stooges? When it comes to Russia or Ukraine, clearly we understand how rotten everything related to him is. When its BLM or the invaders influx to Europe, we constantly promote their agenda?