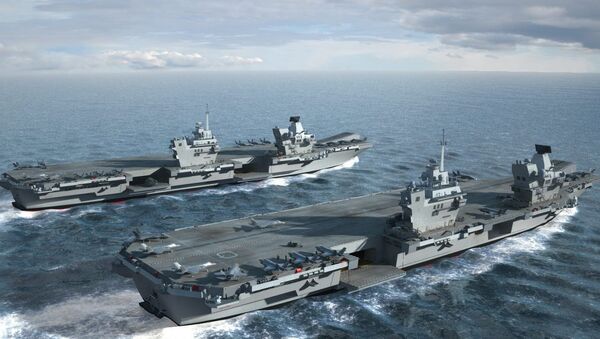 Captain Jerry Kyd, commander of the British aircraft carrier HMS Queen Elizabeth, has said that he’d like to see American warplanes mobilized onboard for at least nine months after the new ship officially comes into service.

Defense News reported that Kyd wants the Bell Boeing V22 Osprey tiltrotor aircraft and US Marine Corps F-35B fighter jets deployed for extended periods of time once the Queen Elizabeth is fully up and running.

"We’ll certainly see some footprint aboard the ship," he said. "The big question is do they deploy with us much longer term in the future, maybe for six, seven, eight, nine months from when we deploy. That’s what I would love to see."

Construction is wrapping up on the 65,000-ton ship, which is slated to begin flight trials with British fighters in the summer of 2018. The Royal Navy has had problems with manpower and learning the new platform, but Kyd is confident that the challenges can be met.

He told Forces TV, "Everyone understands the challenges we have across the country for engineers, particularly. But right now I've got 650 sailors on board the ship all beavering away… they're all very excited. We just want to get the ship out to sea, actually!"

When Kyd first arrived on the Queen Elizabeth in May he called captaining the vessel is "without doubt the pinnacle of my career," according to the Royal Navy Website.

Part of the decision to deploy American fighter jets from British warships is based on funding issues the Royal Navy has in acquiring the number of aircraft needed to mount a respectable strike force. Eight F-35Bs have been acquired so far, and another batch is in the process of being purchased.

Kyd said, "We are constrained by the F-35 buy rate even though that was accelerated in Strategic Defence and Security Review (SDSR) in 2015, so initial operating capability numbers in 2020 are going to be very modest indeed. We will flesh it out with helicopters, and a lot depends on how many USMC F-35s come on our first deployment in 2021. But by 2023 we are committed to 24 UK jets onboard and after that it’s too far away [to say]."