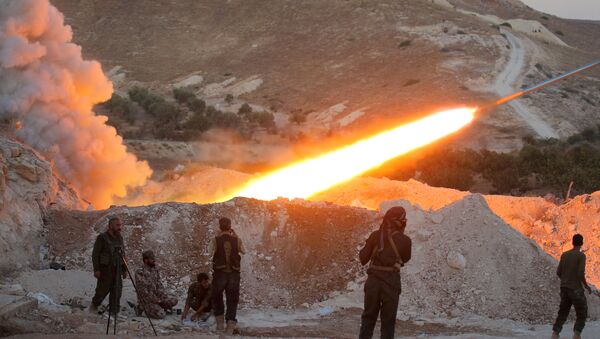 © REUTERS / Ammar Abdullah
Subscribe
Commenting on the warmongering US rhetoric towards Russia and its threats that the terrorists would “exploit the vacuum” to attack Russian interests and even cities, Russian political analyst Alexei Fenenko explained why the US will continue arming the radical opposition in Syria and what its rhetoric is all about.

US Comments on Daesh Threat in Russia 'Emotional Breakdown'
“Extremist groups will continue to exploit the vacuums that are there in Syria to expand their operations, which could include attacks against Russian interests, perhaps even Russian cities. Russia will continue to send troops home in body bags, and will continue to lose resources, perhaps even aircraft,” John Kirby, the State Department's spokesperson, threatened on Wednesday during his press briefing.

Commenting on the remark, Russian Deputy Foreign Minister Sergey Ryabkov said on Thursday that it reflects a state of "emotional breakdown."

Meanwhile Alexei Fenenko, leading researcher at the Institute of International Security Problems of the Russian Academy of Sciences, explained to RIA Novosti what's behind the rhetoric and how the US will continue arming the radical opposition in Syria.

"The US will further try to arm the radical opposition in Syria, it is part of their strategy," the expert said.

"The Americans have invested too much into Syria to retreat that easily. Against all its rhetoric on Syria, any US attempt to backtrack will be regarded as a defeat, thus they will continue activating the radical opposition," the political scientists said.

Russian Foreign Ministry Spokeswoman Zakharova Holds Weekly Press Briefing
He further explained that from now until January it is going to be a very dangerous period, as Obama is leaving and he needs to do something really outstanding by the end of his presidency.

"I am not optimistic on our prospects for further cooperation. Obama is becoming not just a "lame duck" but he is in dire need if doing outstanding before he leaves. The so-called "rescue" or "salvation" of the Syrian opposition might become some of these "outstanding events," the expert stated.

000000
Popular comments
The terror state Usa see no way out of the terror war there started !!! Losing face is the minor problem but other small country's will not more so easy obey what the terror state tell them..... To accept that have lost in Syria will be just as or more dramatic as after loosing the Viet Nam War! And bring chaos to the Usa government !!!!
tobi.gelando
29 September 2016, 19:47 GMT5
000000
As someone recently commented, countries are not peeing their pants so readily when the US (Pentagon) flexes its muscles. It must be frustrating for them after years of being wrapped up in their own self determined, significance. Be prepared for them to instigate something reckless. I just wish servicemen and women could see who is leading them and refuse to be the fodder.
Michael Hill
29 September 2016, 19:26 GMT4
000000
Newsfeed
0
New firstOld first
loader
LIVE
Заголовок открываемого материала
Access to the chat has been blocked for violating the rules . You will be able to participate again through:∞. If you do not agree with the blocking, please use the feedback form
The discussion is closed. You can participate in the discussion within 24 hours after the publication of the article.
To participate in the discussion
log in or register
loader
Chats
Заголовок открываемого материала
Worldwide
InternationalEnglishEnglishMundoEspañolSpanish
Europe
DeutschlandDeutschGermanFranceFrançaisFrenchΕλλάδαΕλληνικάGreekItaliaItalianoItalianČeská republikaČeštinaCzechPolskaPolskiPolishСрбиjаСрпскиSerbianLatvijaLatviešuLatvianLietuvaLietuviųLithuanianMoldovaMoldoveneascăMoldavianБеларусьБеларускiBelarusian
Transcaucasia
ԱրմենիաՀայերենArmenianАҧсныАҧсышәалаAbkhazХуссар ИрыстонИронауОssetianსაქართველოქართულიGeorgianAzərbaycanАzərbaycancaAzerbaijani
Middle East
Sputnik عربيArabicArabicTürkiyeTürkçeTurkishSputnik ایرانPersianPersianSputnik افغانستانDariDari
Central Asia
ҚазақстанҚазақ тіліKazakhКыргызстанКыргызчаKyrgyzOʻzbekistonЎзбекчаUzbekТоҷикистонТоҷикӣTajik
East & Southeast Asia
Việt NamTiếng ViệtVietnamese日本日本語Japanese俄罗斯卫星通讯社中文（简体）Chinese (simplified)俄罗斯卫星通讯社中文（繁体）Chinese (traditional)
South America
BrasilPortuguêsPortuguese
NewsfeedBreaking
21:51 GMTAct of Sabotage Results in Power Outage in Damascus, Energy Minister Says
21:35 GMTOld Friends Are Not the Best?
21:08 GMTMilley Assured Pelosi That US Military, Not Trump, Controlled the Nukes, Vice Chairman Says
21:05 GMTFed. Chief Powell Orders Sweeping Ethics Review Amid Trading Scandal at Federal Reserve
20:38 GMTBiden to Convene COVID-19 Summit on Margins of UN General Assembly
20:30 GMTFootball Legend Pele 'Rushed Back' Into Intensive Care Days After Colon Cancer Surgery
20:21 GMTRussia Possesses ‘Unbelievable Military Power’ After Transforming Forces, US General Says
20:20 GMT‘Irony of Historical Proportions’: Iran Ex-FM Zarif Muses on US Deal to Sell Australia Nuclear Subs
19:47 GMTPrince Andrew Has a Week to Challenge Court Ruling to Serve Papers Amid Procedure Disagreements
19:43 GMTFDA Panel Votes Against Offering Pfizer Booster Shots for COVID-19 to Most Americans
19:37 GMTFrance Recalls Ambassadors From US, Australia for Consultations over AUKUS Alliance
19:34 GMTUS Prosecutors Reportedly Plan to Charge Ex-Boeing Employee for Concealing Truth About 737 MAX
19:28 GMTAlt-Right Proud Boys Warn Members to Avoid 'Trap' of Washington DC Rally
19:18 GMTTrump Sends Letter to Top Georgia Officials Demanding to End 'Illegitimate' Biden's Presidency
19:18 GMTTaliban Reportedly Ditches Women's Ministry in Favour of 'Ministry of Virtue and Vice'
19:09 GMTUS Gen. McKenzie Admits Kabul Airstrike 'Was a Mistake', Killed Only Afghan Civilians
19:07 GMTPresident Trump’s Dismissal of Bill Barr’s Warnings Cost Him Presidency, Book Claims
19:03 GMTDeSantis Slams Biden for ‘Dramatically’ Seizing Florida’s COVID-19 Treatment
19:00 GMTWH Reportedly Plans to Launch 'Deportation Flights' to Haiti as Texas Migrant Crisis Worsens
18:50 GMTKiwi Cricket Team Could Have Been Attacked, New Zealand PM Ardern Told Pakistan PM Khan