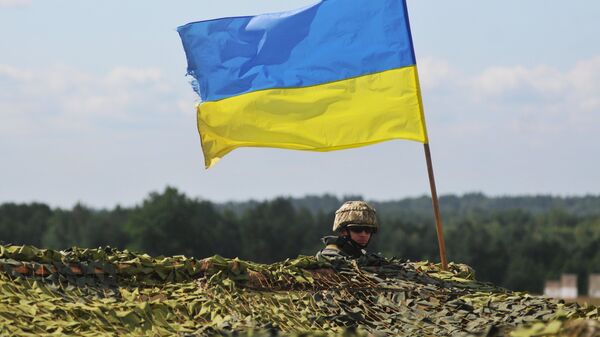 © Sputnik / STR
/
Go to the mediabank
Subscribe
International
India
Africa
Ukrainian President Petro Poroshenko has vetoed a law which would have allowed contract soldiers to break their contracts early. According to Ukrainian politics expert Yuri Sergeyev, this is simply another sign that Kiev is becoming more and more fearful of mass desertion, as the civil war in eastern Ukraine continues to drag on.

Speaking at a briefing on Tuesday, Deputy Chief of the Ukrainian General Staff Volodymyr Talalay confirmed that President Poroshenko had recently vetoed a law proposing amendments to the Law on Military Service, which would allow contract soldiers to break their contracts.

According to the officer, the changes proposed by this law would have resulted in "negative consequences" for Ukraine's national defense. "We cannot afford to strip military units of personnel today," he added.

LPR Militia Says Intercepted Ukrainian Combat Drone With Explosives
Commenting on this decision in an analysis for the PolitRussia news website, Ukrainian politics expert Yuri Sergeyev suggested that "a great deal is actually hidden between such dry formulations" by Ukraine's top military officials.

"In the first place, it is recognition by Ukrainian politicians and generals that there are fewer and fewer Ukrainians…willing to fight against their fellow citizens in Donbass," the commentator explained.

And this is the case "in spite of the upbeat declarations about the army's transitioning to contract service being in full swing – and that soon, military commissariats will not have to resort to conscription and mobilization."

According to Sergeyev, the primary aim of the amendment to the Law on Military Service was to free men caught up in the first wave of mobilization in 2014, who have since been tricked into endless contract service, because the conditions of their contracts stipulated that they can leave the army 'at the end of the special period' (Kiev's term for the civil war) and in the event that a decision to demobilize is made.

In other words, the journalist noted, their contract has effectively obliged them to serve "so long as authorities want to continue to pursue their hybrid war against the Donbass Republics," thus turning them into "21st century serfs."

Stratfor Says Ukraine Ceasefire Might Work…As Congress Prepares to Send Weapons
These soldiers' situation has only been made worse by the fact that that the financial compensation they were initially promised has been significantly more meager than expected. "Even in 2016, when the professionals were promised 7,500 hryvnia ($290 US) a month in wages, Kiev left out the part that this is only the case during hostilities. In times of calm and during exercises soldiers receive a maximum of 4,500 hryvnia ($175), and some of that figure is often subtracted for a variety of fines and other deductions."

Unfortunately, Sergeyev noted, even Rada lawmakers' proposal to allow these 'indefinite contract servicemen' to be given the option not to have their service automatically renewed was nearly enough to "give Poroshenko and his generals a heart attack."

After all, it's one thing to talk about the Ukrainian military's 'unbending fighting spirit' and 'inexhaustible mobilization potential', and quite another to actually fill the army with the needed warm bodies.

"In fact, the 7th wave of mobilization, rumors about which are circulating among social networks and Ukrainian forums, has not been announced for one simple reason: there's nobody else to take in. More precisely, there are people, but only among those who were already called up in the first waves of mobilization. And taking them in is hardly likely to cause enthusiasm…"

Ultimately, Sergeyev suggested, Talalay's candid acknowledgement about Poroshenko's veto, combined with the horrible situation in the ranks of Ukraine's 'professional army', deflates any hopes Kiev might have in building up their military, even with NATO and US assistance, and crushing the Donbass militia.