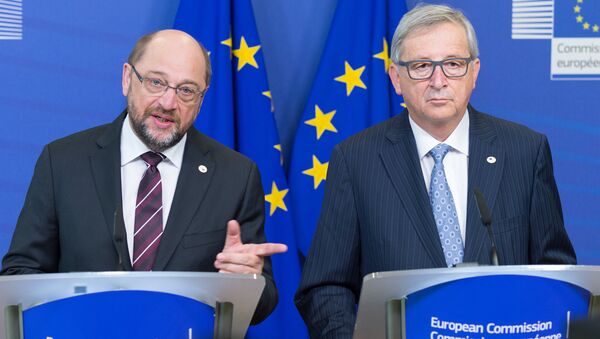 European Commission President Jean-Claude Juncker and Parliament President Martin Schulz have once again defended the controversial plan to relocate migrants from Greece and Italy according to a quota plan, as well as the EU-Turkey migrant deal, despite growing opposition within Europe.

Despite massive opposition in many member states, Juncker and Schulz are still arguing for the migrant policy to be imposed, because both the Greece-Italy relocation plan and the EU-Turkey migrant deal have been agreed at Brussels-level.

Speaking in Brussels in a TV program sponsored by France 24 and Radio France International, Juncker said:

"The refugee crisis is being blocked by several member states. Germany received, last year, a million refugees. If you distribute a million refugees amongst 500 million Europeans in 28 countries, it's not a problem. But if only four or five countries have to tackle the challenge and 20 countries say they will have nothing to do with it, then there's a problem. We adopted the rules and the member states are not applying the rules."

Their comments are significant in that they show the widening gulf between the world of Brussels and public opinion within member states, amid rising nationalism and euroskepticism, epitomized by Brexit and the growing support for right-wing parties across Europe.

It is Brussel's policy to relocate 160,000 refugees from Greece and Italy to member states according to a mandatory quota system based on each member state's population and GDP, among other factors. However, this has run into massive opposition from many countries — particularly those in Eastern Europe.

Meanwhile, the EU-Turkey migrant deal still being negotiated has run into massive opposition, both from member states and from the UN Refugee Agency, UNHCR, and many NGOs. Under the deal, "irregular migrants" — those refused asylum in Greece — are to be relocated back to Turkish refugee camps in return — one a one-for-one basis — for Syrian refugees being relocated from Turkish camps to EU member states.

As part of the deal, Turkish accession into the EU would be speeded up and its citizens be granted visa-free access into the Schengen area of the EU. However, this has hit the buffers over Turkish President Recep Tayyip Erdogan's refusal to make changes to anti-terror laws that critics say are being used to crack down on opposition and the media.

Opponents of Turkish accession also point to Erdogan's increasing grip on power and failures to meet EU common standards on the freedom of speech and the media, as well as human rights issues.

The fact that Juncker and Schulz are continuing to argue the case for a Brussels-led answer to the migrant crisis, in the face of massive opposition from within member states is a further sign of the yawning chasm growing between Brussels and the general population of Europe.