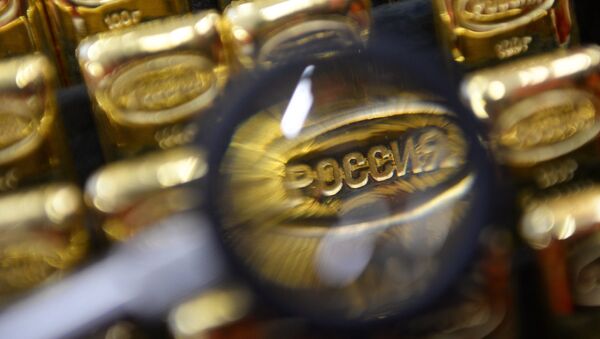 Russia plans to stock up on about 200 tons of gold this year, nearly matching the 208 tons it purchased in 2015. That's according to Anton Navoi, the deputy head of the statistics department at the Russian Central Bank. Navoi explained that it's profitable for the state to buy the precious metal, since Russia is a world leader in its production.

Speaking at a conference on Wednesday, the official said that "last year, the Central Bank purchased 208 tons of gold. This year, it will purchase around 200 tons."

Gold currently accounts for around 16 percent of the country's foreign exchange reserves, Navoi noted. And while there is no directed effort to increase the precious metal's share in Russia's reserves, it seems likely to happen, as the purchase of gold is profitable for the country.

"The Central Bank is buying gold because it is profitable. We are a country that is third in the world in terms of gold production, and we have the ability to buy it using our national currency, in contrast to other countries, which do not have such an opportunity," the banker concluded.

Gold Yuan: Post-Dollar World Order Emerging in Eurasia
At the beginning of the year, the Russian Central Bank purchased 3.6 million ounces (112 tons) of gold. As of September 1, Russia's gold reserves totaled 49.1 million ounces (1,527.2 tons), valued at an estimated $64.71 billion US.

Russia has steadily built up its gold reserves over the last decade. In 2007, reserves totaled 402 tons. By 2012 they more than doubled to 883.2 tons; now, by the end of this year, the total looks set on nearly doubling again, this time to over 1,600 tons.

With analysts predicting that global gold prices will continue to rise (prices have already spiked nearly 20% since January), Chinese investors are actively looking to increase their investment in Russian gold production.

According to Rosgeo, Russia's state-owned geological exploration company, Russia may beat out Australia to become the world's second gold producer (next to China), by 2030. Producing 247 tons in 2014, Russia could produce up to 400 tons of the material in a decade and a half.

In addition to its use to produce jewelry, electronics, and aerospace equipment, gold has become an attractive investment option for the Russian and Chinese Central Banks, in part due to its high yield compared to US Treasury bonds. Analysts have also suggested that Moscow and Beijing's decision to reduce their dependence on US debt has to do with an effort to reduce Washington's ability to put financial pressure on the countries in a time of increasingly tense political relations.