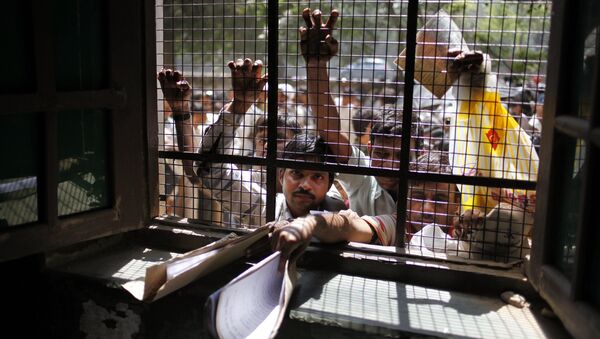 In rural sector in India, unemployment rate was 5.1 percent whereas in urban sector, the rate was 4.9 percent, according to report of Labour Bureau of India’s Labour and Employment Ministry.

NEW DELHI (Sputnik) – Unemployment rate in India has reached 5 percent, its highest level in five years, Labour Bureau of India’s Labour and Employment Ministry said in a report on Thursday.

"In rural sector, unemployment rate was 5.1 percent whereas in urban sector, the rate was 4.9 percent under the Usual Principal Status [the activity status, on which a person spent relatively longer time] approach," the report said.

India To Face Massive Unemployment, Social Unrest Amid Demographic Boom
The figure was higher among females compared to males, 8.7 percent to 4.3 percent.

According to the fifth annual report, around 77 percent of the Indian households that were covered in the survey had no regular wages. A total of 156,563 households participated in the survey, including 88,783 in the rural area and 67,780 in cities.