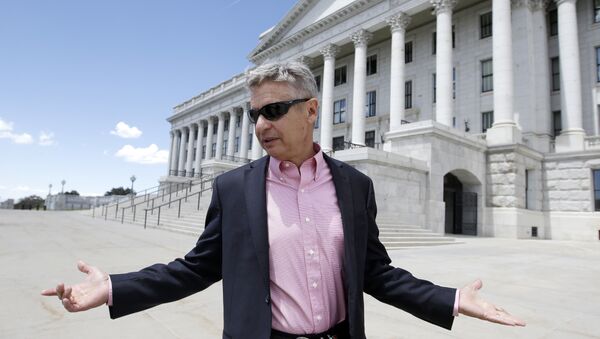 © AP Photo / Rick Bowmer
Subscribe
US Libertarian presidential nominee Gary Johnson has become the butt of jokes once again, after he was stumped when asked to name his “favorite foreign leader.”

The former two-term New Mexico governor made headlines recently because he did not know what “Aleppo” was.

During Wednesday’s town hall TV event on MSNBC, Johnson shut down when asked about his favorite world leader, staring blankly and awkwardly, without response.

“I guess I’m having an Aleppo moment in the [name of the] former president of Mexico,” Johnson responded.

Green Party nominee Jill Stein attempted to troll Johnson on Twitter, but she did not name any world leaders either. She tweeted, “here are a few of my favorite leaders,” then listed Jeremy Corbyn, João Stédile, and Elizabeth May.

“May, Stédile, and Corbyn, however, aren't technically world leaders, as none holds a top position in their country's government. May is a member of the Canadian House of Commons. Stédile is an economist and member of Brazil's Landless Rural Workers Movement, which he helped found. Corbyn is the leader of the Labour Party in Britain,” Politico noted.

On Thursday, Johnson tweeted, “it’s been almost 24 hours… and I still can’t come up with a foreign leader I look up to.”

000000
Popular comments
He seems an honest man. They are rare in American politics.