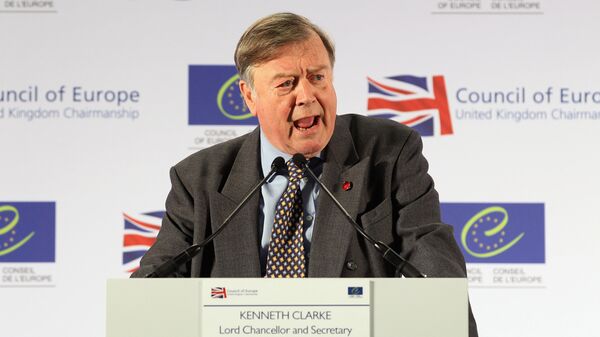 Former UK Chancellor Ken Clarke has blasted Prime Minister Theresa May as being clueless on how to handle Brexit, leaving the UK with a "government with no policies." The outburst is the latest attack on May's leadership by a senior member of her own party.

The turbulence in British politics shows no sign of abating. UK Prime Minister Theresa May has been hit by a fresh wave of staunch criticism from within her own ranks: the Conservative Party.

Ken Clarke is an experienced Tory veteran, who first entered government in 1988, and left in 2014. With all his first-hand insights into political in-fighting and strategy, he's warned that he sees the current government as being seriously lacking in concrete proposals.

Speaking to the New Statesman magazine, he derided:

"Nobody in the government has the first idea of what they're going to do next on the Brexit front."

He reserved particular scorn for Foreign Secretary Boris Johnson, Brexit Secretary David Davis and International Trade Secretary Liam Fox — three euroskeptic MPs which PM May appointed to appease those in her party who campaigned for the UK to leave the EU.

"Serious uncertainty in your trading and political relationships with the rest of the world is dangerous if you allow it to persist," Mr. Clarke warned.

Mrs. May herself, originally pushed for the UK to remain an EU member. She has since promised to uphold the UK's decision to leave the EU, but declined to give any indication on what her Brexit negotiation position is, nor indeed, when negotiations will start.

Her demurral has pushed Johnson, Davis and Fox, all senior members on her cabinet front bench, to publicly push their own vision of what Brexit should mean for the UK.

One such outburst from David Davis came earlier this month, when he claimed that the UK is "unlikely" to remain a part of the EU's single market.

The issue of the single market is crucial — as the UK currently enjoys unfettered access to it, which allows the freedom of movement of lucrative goods and services.

Mrs. May was forced to hastily contradict her Brexit Minister in the House of Commons less than 24 hours later.

According to Ken Clarke, Mrs. May should expect more of the same. He said that the feud within the Conservative Party on what a post-Brexit UK should look like, means that Prime Minister May is doomed, whatever her final decisions.

"Whatever is negotiated will be denounced by the ultra-euroskeptics as a betrayal.

"Theresa May has had the misfortune of taking over at the most impossible time. She faces an appalling problem of trying to get these 'Three Brexiteers' [Johnson, Davis and Fox] to agree with each other, and putting together a coherent policy which a united cabinet can present to a waiting Parliament and public.

"Because nobody has the foggiest notion of what they want us to do."

However, Clarke is sure that whatever the UK Government official position on Brexit, he will vote against it.

His comments on Thursday, make him the first Conservative MP to vow publicly to vote against the UK leaving the European Union.

Labeling the June 23 decision by 51% of Brits to leave the EU as "a bizarre protest vote," Clarke said:

"The idea that I'm suddenly going to change my lifelong opinions about the national interest and regard myself as instructed to vote in parliament on the basis of an opinion poll is laughable.

"My constituents voted Remain. I trust nobody will seriously suggest that I should vote in favor of leaving the European Union. I think it's going to do serious damage."

And it's not just the current Prime Minister who Clarke is critical of.

Ken Clarke: “Nobody in the government has the first idea of what they’re going to do next on the Brexit front” https://t.co/0BM7CH18Vr

@natalieben No idea, no policies, no principles. But hey, Brexit means Brexit

"He will go down in history as the man who made the mistake of taking us out of the European Union, by mistake," Clarke said.

A clear road map for Britain's political future remains elusive. The closest indication on when Article 50 will be triggered — the official mechanism that starts the two year process to leave the EU — came from European Union President Donald Tusk, earlier his month.

After a Downing Street meeting with Prime Minister May, he said:

"Prime Minister May was very open and honest with me," he said.

"She declared that it's almost impossible to trigger Article 50 this year but it's quite likely that they will be ready maybe in January, maybe in February next year," Donald Tusk said.

Unfortunately for Brits, Mrs. May has yet to be open and honest on what her plans are concerning their future.