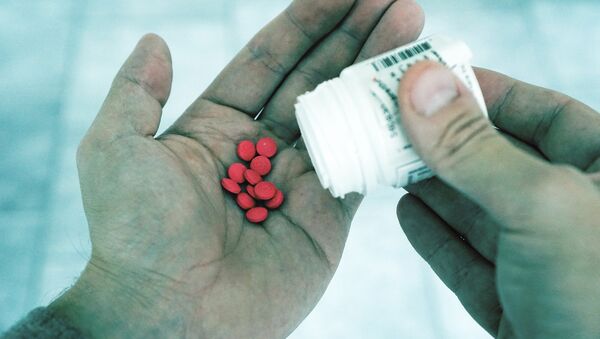 © Photo : Pixabay
Subscribe
Drugs have never been easier to access in prison according to a new report out by Her Majesty's Prison Service.

Fentanyl So Dangerous US Police Fear Touching or Inhaling It
Inspectors have found that the level and availability of drug use in British prisons is increasing. A survey of HMP Bedford prison for example, revealed that the number of prisoners saying how easy it was to get drugs had doubled since the last inspection in 2014. The number of people who said they had developed a drug problem while in prison had also increased, from 4 percent to 14 percent.

The report was highly critical of the prison system and Chief Inspector of Prisons, Peter Clarke, said that something had to be done to stop the increase of drugs in UK prisons to avoid the risk of more deaths.

​"The stark reality is that prisoners told us it was easier to get illegal drugs in the prison than it was to get clothes or sheets."

Drugs, referred to as legal highs, before they were made subject to a blanket ban rolled out earlier this year, have been identified as a major factor in the upsurge of violence and self-harm behind bars in England and Wales.

The bigger the #prison, the less safe it is. New research in @PSJ_UK https://t.co/Qtyezc2ujG

Sputnik spoke to leading drug expert, Steve Rolles senior policy analyst at Transform, about the war on drugs in prisons.

"Due to oppressive punitive drug laws across the world there is a high proportion of inmates who are problematic drugs users, involved in the illicit drug trade. There is demand for drugs, made worse by the misery of being in prison and connected people who know how to get them," Mr. Rolles told Sputnik.

Mr. Rolles said this combined with poorly paid prison staff open to corruption and huge daily flows of people and goods coming in and out of the facilities, you have a situation in which extensive drug markets have become a reality.

It's easy to access high potency and value drugs, according to Mr. Rolles, as it isn't hard to conceal them. The reality is that there are multiple ways that drugs can enter the prison — via visitors, staff, over the walls, as well as by using drones and in smuggled-in prison supplies.

"Demand creates a financial incentive and supply can always find a way when the price is right. In practice, little or nothing can be done to stop it. Even the highest security prisons have drugs, people have actually died of overdoses in supermax [maximum security] prisons, in solitary confinement,"Mr. Rolles told Sputnik.

So what is the issue in this cycle of destitution — is this a prison problem or a drug one?

New punishments to tackle drugs in prison will repeat the mistakes of the past https://t.co/KfbCwmCq4L

​"At the heart of the problem is the war on drugs that criminalizes millions of people who use drugs and hands control of the market to criminals. We then spend billions arresting and imprisoning these people, who have no effect on drug use or drug markets and have successfully, created a prison overcrowding crisis with out of control drug markets and a public health disaster," Mr. Rolles told Sputnik.

Mr. Rolles believes there is no quick fix and the starting point is to stop criminalizing and imprisoning people who use drugs, instead getting them into the appropriate treatment programs.

"This specifically includes provision of needle exchanges and opiate substitution treatments. Prison is a terrible place to address drug related health issues, as it's expensive and generally makes things worse, not better. If problematic drug users do end up in prison they need access to appropriate treatment and services, again including harm reduction," Mr. Rolles told Sputnik.

"We also need to take control of the drugs market by legalizing and responsibly regulating drugs and prevent the next generation of drug gangsters being created and then filling our prisons. We need to move from a punitive model to one rooted in health and human rights."