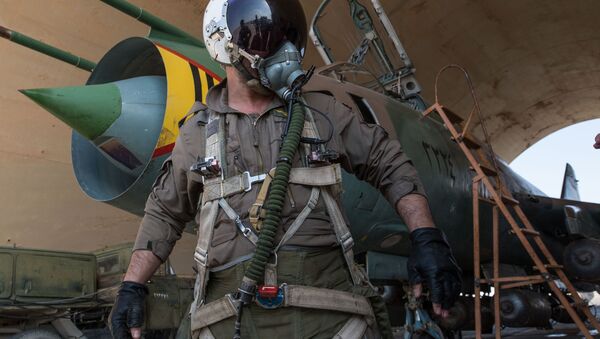 © Sputnik / Iliya Pitalev
/
Go to the photo bank
Subscribe
The governor of Syria's Homs province, Talal Barazi, praised Russia's role in facilitating the withdrawal of militants from the El Waer suburb, the last terrorist stronghold in the city of Homs, in an interview with Sputnik.

Americans 'Clearly Know' That US-Made Weapons Now in Hands of Syrian Terrorists
DAMASCUS (Sputnik) — More than 100 militants and their families left El Waer on Thursday in accordance with the deal negotiated with the Syrian government.

"Russia's participation filled the gap left by the United Nations and provided logistics and field conditions that ensured withdrawal of militants and their families from the El Waer neighborhood toward the north of the Homs province," Barazi said.

In his opinion, the most important achievements of the Syrian army after the Russian Aerospace Forces launched the anti-terrorist campaign in Syria are the liberation of the cities of Palmyra and Al Quaryatayn both located in the Homs province and efforts applied by them to protect the eastern city of Deir ez-Zor.

"The presence of Russian forces along with the Syrian army has a special significance because they liberated multiple areas and cities," the governor pointed out.

Russia has been conducting an aerial campaign against terrorists in Syria since September 30, 2015 at President Bashar Assad's request. Russian military aviation had carried out more than 9,000 sorties until March 2016, helping Damascus turn the tide of war and launch offensives in key regions of the country.

Hmeimim air base and a naval facility in the port of Tartus remain operational while Russia's S-400 and Pantsir air defense systems continue to be on duty in Syria to protect Russian servicemen in the war-torn country.