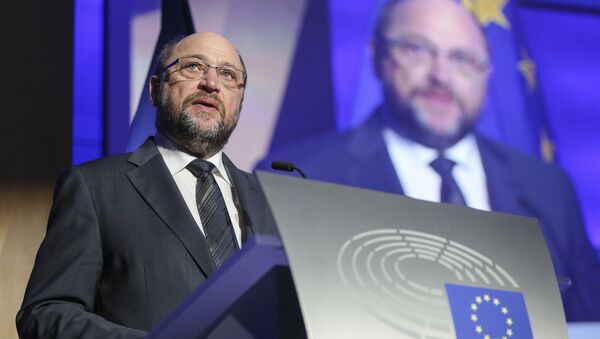 Battle lines have hardened in the European Parliament, with British members putting forward plans to try and prevent parliament president Martin Schulz from seeking another term in the role, creating further divides among MEPs.

With speculation rife that Schulz will try and seek a third two-and-a-half-year term when his current mandate runs out early next year, British MEP Ashley Fox from the UK-dominated Conservatives and Reformists (ECR) group proposed an amendment calling for a five year cap on the term of a European Parliament president.

We're working to take the #EU in a new direction. Watch our video at http://t.co/5YiKOE45Kp to find out why. pic.twitter.com/xYca0jJeJQ

While Fox said his amendment would "promote fresh leadership" and "showcase the democratic values" of the parliament, many have interpreted the developments as a direct plan to prevent Schulz from running again.

​While Schulz hasn't announced his future plans, there is growing speculation the German will once again be the presidential candidate for the center-left coalition of Socialists and Democrats (S&D) in the January 2017 election, angering many right-wing MEPs who have rejected the prospect of Schulz staying in the role for seven-and-a-half years

According to parliamentary protocol, the EP president should alter between the parliament's main parties every two-and-a-half years, however Schulz has already held his position for five years, and was given a boost when European Commission chief Jean-Claude Juncker seemingly backed the 60-year-old to remain in his post.

What can you see Martin Schulz,Your Empire crumbling? Go back to selling books. pic.twitter.com/O8CDxaTrze

​​"I am in favor of the European institutions being led for the next two-and-a-half years as they have been thus far. We need stability," Juncker told German newspaper der Spiegel in July.

The ECR's amendment to block Schulz from running for a third term has been looked upon favorably by six of the parliament's eight political groups, with Schulz's own S&D coalition unsurprisingly against the plans.

The proposals will now be put to the EP's constitutional affairs committee in November before being discussed in a parliamentary plenary session.

I agree with Martin Schulz that UK participation in another round of Europarl elections would be farcical and hence we must be gone by 2019.

​Given that the challenge has come from British MEPs, some Schulz supporters have dismissed the proposed amendment as a last ditch attempt to have some influence on the bloc before the UK faces an imminent Brexit.

Martin Schulz's #LSEBrexit speech was bizarre. Doesn't get why Brexit happened, no attempt to understand it, wants more EU integration.

​However ECR officials have rejected the criticism, saying they will work as normal, until the UK actually does leave the bloc.

"We are still here, and very much involved, probably for the next two and a half years of the mandate. So we are directly concerned. And we really want the European institutions to work as well as possible," Robert Taylor, the ECR spokesman in the European Parliament, told Euractiv.