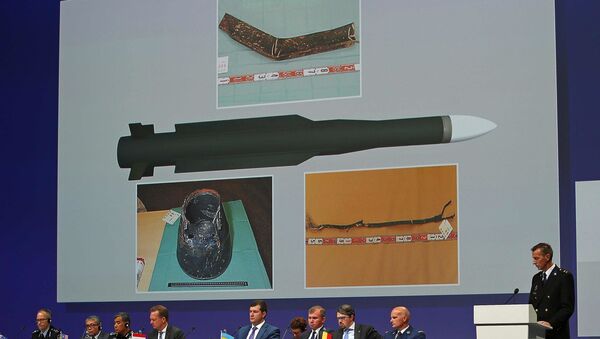 The Joint Investigation Team has presented the initial results of the criminal investigation into the MH17 crash in eastern Ukraine. During the press conference the exact location where the plane had been downed and by which weapon have been announced.

During two years, some 200 parts of the plane's wreckage have been examined by the investigation team, the JIT said. Moreover, over 200 witnesses have been questioned.

The JIT said that the plane had been downed by a ground-based air defense system as no other planes had been noticed nearby in the airspace over the crash site. The JIT said that a BUK missile downed the plane. Allegedly, the BUK missile was delivered from the "territory of the Russian Federation to Ukraine," the investigation by the team claimed.

"Based on the results of the criminal investigation, it may be concluded that flight MH217 was shot was shot down on July 17, 2014, by a 9M38-series missile launched by a Buk trailer and [it] was brought it from the territory of the Russian Federation and after launch subsequently returned to the Russian Federation territory," Director of the National Criminal Investigation Division of National Police of the Netherlands Wilbert Paulissen said Wednesday.

The Dutch prosecution does not formally link MH17 plane's downing to the Russian state or Russian citizens' actions, the head of the investigation team said.

"We have determined that the weapon arrived from Russia. Having established this, we are not making statements about the role of Russia as a state or people from Russia," JIT chief and Dutch prosecutor Fred Westerbeke said.

World
MH17 Probe Results Unchanged Despite New Radar Data - Dutch Safety Board
The information was received from the US and European specialists, the JIT said. The US provided all information it has related to the MH17 crash.

The Dutch-led investigation team believes that the missile was not launched from territory controlled by Ukrainian troops.

However, the team cannot yet name specific people to blame for the downing of the plane.

The BUK missile defense system and escorting vehicles were later seen in Donetsk, the JIT said, presenting a video showing the convoy.

The JIT presented satellite images before and after the downing of the plane from July 16 and July 21.

The JIT has data on the conversations between Ukrainian air traffic controllers and the Malaysia Airlines MH17 flight.

Russia
Anti-Bellingcat Reports Debunk Myths about MH17 Crash and Russia's Hand in It
Conclusions made by the Russian investigation team are incorrect, however, the JIT has not received them yet, the Dutch-led team said. Earlier, the Russian manufacturer of the BUK missile system and the Russian Defense Ministry presented radar data from the area near the site of the MH17 crash. The JIT promised to examine radar images provided by Russia.

The team said that some 100 persons of interest that had been allegedly involved "in one way of another" in the MH17 plane's downing have been identified during the inquiry. The Dutch-led probe is unable to say whether those responsible for the downing acted independently or on someone's order. Those 100 involved have not been formally identified yet, the JIT said.

The JIT said that it had been unclear yet whether the downing of the plane had been accidental or intentional but "some of those involved were surprised at what had happened."

The Joint Investigation Team's investigation into the MH17 crash has been extended until early 2018.